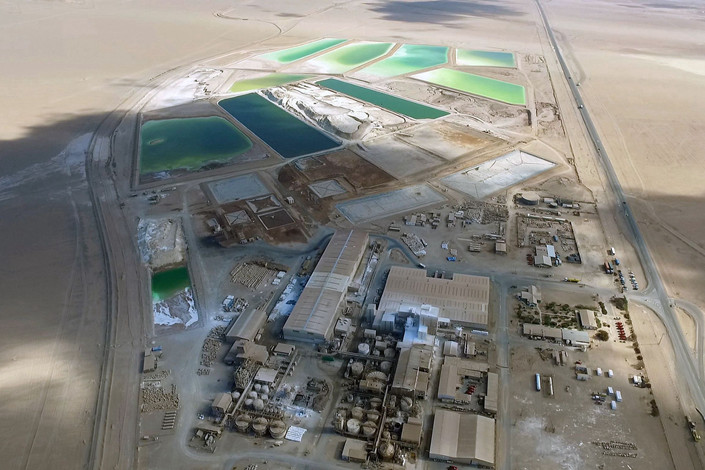 The processing plant of a lithium mine in the Del Carmen salt flat in northern Chile is shown in this SQM file photo taken in December 2016. Photo: VCG

* The remaining $3.5 billion will be provided by two China Citic Bank-led consortiums, both of which have to be repaid in two to five years

(Beijing) — It took Tianqi Lithium Corp. more than half a year to finally close its deal to purchase a 23.77% stake in rival Sociedad Quimica y Minera de Chile SA (SQM) after clearing a series of regulatory hurdles in the South American nation.

The $4.1 billion deal, however, is seen by some as a risky move. Tianqi, which has around 12 billion yuan ($1.77 billion) in assets, relied on leverage to make the investment.

With the deal, Tianqi is placing a huge bet that demand for lithium — a vital material in the production of batteries for electric vehicles — will see strong growth in coming years as the Chinese government has chosen electric vehicles as a key strategic industry.

“The tie-up with SQM is a hard-won deal, and we are looking at the fast development of the lithium industry over the next five to 10 years,” said Wu Wei, the company’s president, in an interview with Caixin (link in Chinese).

According to the financing terms, $726 million will come from Tianqi’s own coffers and the remaining $3.5 billion — over 80% of the total — will come from outside. China Citic Bank, which in 2016 advised on the $43 billion deal in which China National Chemical Corp. bought Swiss pesticide and seed manufacturer Syngenta AG, is acting as the major backer and financial advisor.

Two Citic-led consortiums — one involving international banks and the other Chinese banks — will be formed to provide the $3.5 billion, which, will have to be returned with interest over the next two to five years.

To secure the loans, Tianqi has promised to pledge the assets of several subsidiaries. including Shehong Tianqi, Jiangsu Tianqi and Tianqi Xinlong. These three, combined, contributed over 10% of Tianqi’s net profits in the first half of last year, according to the company’s financial report.

In order to diffuse Chilean regulators’ antitrust concerns, Tianqi has promised to limit its influence over its SQM, agreeing not to appoint any directors to the latter’s board. This, along with its noncontrolling status, means that its investment in SQM is not an acquisition.

Tianqi’s stake, which will total 25.86% after accounting for 2% it already had before the latest deal, could produce over $1.2 billion in dividends over the next five years, based on previous earnings estimates. But this amount would only offset the interest incurred by $3.5 billion in loans, industry experts have calculated. Moreoever, this figure could only be reached if SQM decides to pay Tianqi a share of dividends equal to its total share in the company.

After the deal, Tianqi’s liability-to-asset ratio will be up to 78% from 40% currently, the company estimates. Wu said his company has plans to lower its debt level.

One of the ways it aims to do this is by raising capital from its existing investors in the public markets. In November, the Shenzhen-listed Tianqi said it would issue up to 5 billion yuan in convertible bonds. And the same month, its plans for a second listing in Hong Kong was approved by Chinese regulators.

However, investor enthusiasm for these offerings could be subdued, said an investment banker, who declined to be named. The banker cited the recent experience of Jiangxi Ganfeng Lithium Co. Ltd., which has seen its stock price fall 25% since it debuted in Hong Kong in October.

Investor interest is likely to be strongly influenced by whether the price of lithium shows signs of picking up. Lithium carbonate, one of the most traded forms of the metal, is currently priced at 70,000 yuan to 80,000 yuan per ton, as overcapacity has seen the price decline from 170,000 yuan to 180,000 per ton at its peak between 2015 and 2018.

The lithium price “rollercoaster” has taken a toll on Tianqi, whose profit posted a compound growth rate of 250% during the years from 2015 to 2017. But that momentum slowed last year when price began to drop. For the first three quarters, Tianqi reported profit of 1.7 billion yuan, which an increase of 11.24% year-on-year, down from a 26.14% increase for the same period in 2017.

In December, financial rating firm Moody’s downgraded Tianqi’s performance to Baa3, a rating that represents a relatively low-risk bond or investment, but not suitable as a long-term holding.

As its debt mounts, Tianqi is also mired in many expensive programs. Five major projects worth a total of around 9 billion yuan are currently underway, including a refinery in Southwest China’s Sichuan province that will have an annual capacity of 200,000 tons of lithium carbonate.

Like Tianqi, other rivals are also rushing to ramp up capacity.

However some are worrying that there may already be a glut of lithium and related materials. In 2018, China’s lithium carbonate supply was reportedly excessive by 48,200 tons and this year the figure is expected to be 30,300 tons, according to industry data website www.smm.cn.

Given this situation, it is impossible that the price of lithium will increase in the short term, said an industry analyst who asked to remain anonymous. But he added that the current lithium supply is still not adequate to meet future growth in demand.

For Wu, Tianqi’s president, lowering the debt level is key in the short term.

“Tianqi’s current priority is to absorb the SQM deal, we need to adopt a down-to-earth strategy to ensure that we can prove to the market that we can manage the deal — just like we did last time,” he said, referring to the company’s purchase of Greenbushes in Australia, the world’s largest hard-rock mine, from Talison in 2013. That deal cost Tianqi 3 billion yuan.

“We will have to separate our goals into several steps. And it will be a test whether we can put plans into implementation in the next two years,” he said.