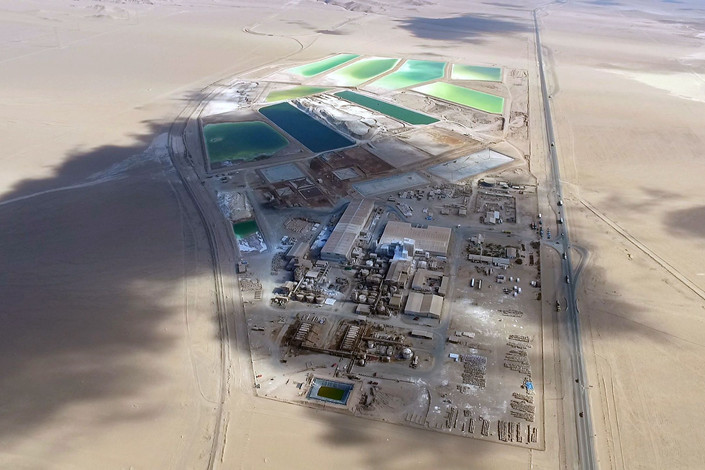 An aerial view shows the brine pools of the SQM lithium mine on the Atacama salt flat in northern Chile, Jan. 10, 2016. Photo: VCG

The deal was announced on Monday and will see China’s largest lithium producer purchase the stake from Canadian fertilizer company Nutrien Ltd., according to a filing (link in Chinese) with the Shenzhen Stock Exchange.

The purchase increases China’s already sizeable presence in the global lithium market. Lithium is a vital material for producing batteries for electric vehicles, a burgeoning industry that the Chinese government is trying to develop domestically through substantial subsidies and incentives. While China is home to the world’s fifth-largest volume of lithium deposits, the country’s electric car industry relies on imports to meet 80% of its needs.

Yet Tianqi has not had an easy ride in its purchase of SQM, the world’s second-largest lithium producer. The Chengdu-based company announced the deal in May, but it was held up by an investigation by the Chilean antitrust regulator, after Corfo, the nation’s development agency, raised concerns about the deal’s potential to distort the lithium market.

However, Tianqi won the regulator’s approval in September after proposing measures to prevent it from exerting excessive influence over its rival, agreeing not to appoint any directors to SQM’s board and promising not to disclose any of the company’s confidential information. SQM’s board then took the deal to Chile’s competition court, but it ruled in Tianqi’s favor in October.

SQM has “ambitious plans for expanding its production in Chile,” with demand for lithium only set to rise, Alice Yu, a senior consultant with CRU, told Caixin earlier this year. The purchase will give Tianqi greater access to the element and boost China’s presence in the electric-car-battery supply chain.