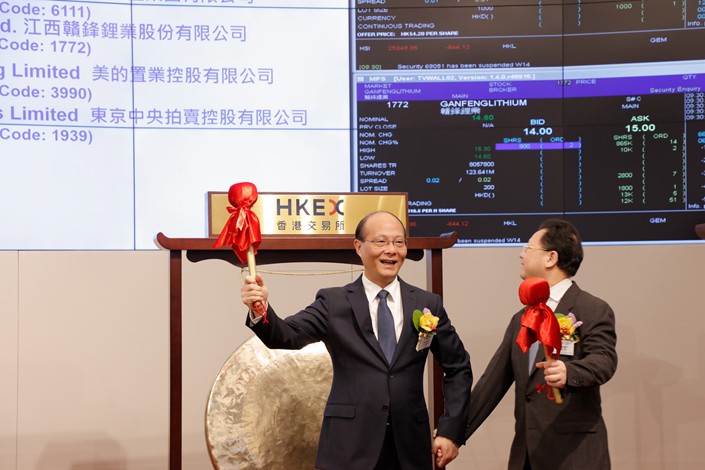 A major advantage of lithium batteries compared to those made of other materials is they tend to be much lighter. This will have been of little comfort to metal producer Jiangxi Ganfeng Lithium Co. Ltd., however, when its stocks sank like lead on its trading debut on the Hong Kong Stock Exchange yesterday.

The company’s listing on the Shenzhen Stock Exchange also resulted in losses, although not so large, closing down 11% in Thursday trading before settling at 25.13 yuan ($3.63) on Friday.

The company produces lithium, a key component in the batteries behind China’s aggressive drive to build up its electric car industry, a boon to miners of the metal. But Ganfeng’s listing comes at a sensitive time. A supply glut of the material had already caused prices to fall this year, but the listing occurred on the same day that global stock markets took a hit as rising interest rates spooked investors.

Ganfeng’s opening slump will be of concern to Tianqi Lithium Corp., China’s largest lithium producer, which filed an application to list in Hong Kong in August. While its prospectus did not say how many shares it would list, it committed to using about 90% of net proceeds to purchase a 24% stake in Sociedad Quimica y Minera. The $4.1 billion deal gained approval from Chile’s competition court last week.

As well as being affected by general lack of confidence in the stock market, industry analysts largely agreed that the current lithium supply glut has hit enthusiasm for miners. Chinese companies have also announced almost a dozen major overseas lithium investments in the past year, which will substantially increase future supply.

“The price of lithium carbonate has fallen sharply this year, but the cost of raw materials in the upstream has not changed much. It may have a certain erosion (effect) on the profits of production companies,” said Hong Wei, a lithium-cobalt analyst at information platform Shanghai Nonferrous Metals.