By Sun Lichao and Jason Tan 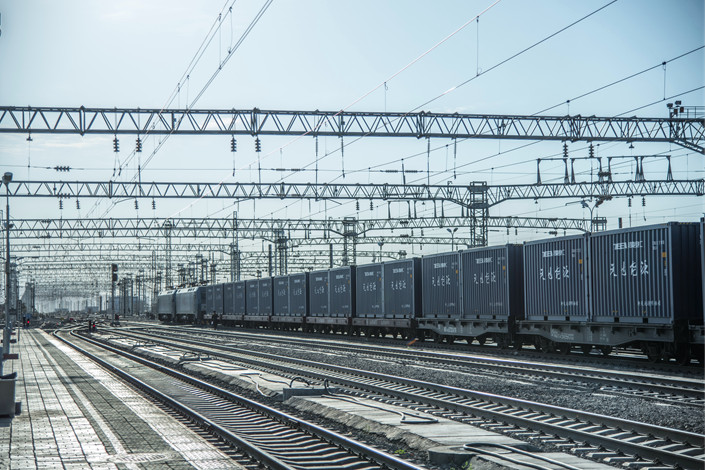 China’s national railway operator needs to streamline its bureaucracy and empower local bureaus to make decisions if it wants to shore up its cargo business and pare down debt, industry watchers say.

The comments come after Caixin published an opinion piece last month rekindling years-long debates over China’s debt-fueled expansion of its rail network, and asking whether the reforms undertaken by China Railway Corp. (CRC) to improve its operational efficiency have been effective.

“People often see only the convenience of China’s high-speed rail network and boast about it being the world’s longest, but they turn a blind eye to its enormous debt and operating losses, as well as the serious deterioration of the country’s transportation structure,” wrote Zhao Jian, director of the China Urbanization Research Center at Beijing Jiaotong University.

Trains were once a central method of transporting cargo but they started to give way to roads and waterways in 2016, Zhao said. “Because China’s railway freight capacity cannot meet the demand, a large number of vehicles have been deployed to transport goods and raw materials, like coal, over the roads, which greatly increases logistics costs and seriously reduces overall efficiency in the transportation system.”

Industry experts, who spoke to Caixin on condition of anonymity citing the sensitivity of the issue, agreed that CRC’s attempt to revitalize its cargo business had not borne much fruit.

“CRC is the single entity dealing with clients, relevant billing and transport coordination,” said one rail expert who asked not to be identified. “This leaves little leeway for its domestic bureaus to contribute to business expansion.”

The state operator lacks the agility of its rivals in the private sector, losing out in the areas of seamless coordination of logistics, information sharing and capital flow management — three key areas of competitiveness.

“Today’s business customers are demanding and they want fast lead time. CRC loses out in this regard because it’s time consuming for its various bureaus to coordinate the delivery of goods,” one specialist said.

The rail operator’s other Achilles' heel is its lack of cargo processing centers. Only in last September did authorities say they were crafting a plan to encourage construction of a greater number of short connector railways to move goods like coal, ore and other freight between depots and processing centers.

The plan would allow for construction of such short-distance lines using private money — part of Beijing’s efforts to open up the rail network to outside financing and ownership. Low profitability has made CRC reluctant to build short connector railroads, which typically link up factories or other company facilities with logistics centers like ports or major rail freight centers, a CRC official told Caixin.

“Even when such projects are proposed, the current procedure is relatively bureaucratic and time-consuming. That can create bottlenecks, for example, for shippers of commodities like coal that need to move those goods short distances from rail yards to ports,” the official said.

However, the government policy that encourages coal to be transported by train instead of trucks in an apparent bid to reduce pollution is set to be a boon for CRC.

This will create tailwinds for CRC’s target of boosting its annual freight volume to nearly 5 billion tons by 2020, an increase of 35% from 2017. The plan will see CRC ship up to 2.8 billion metric tons of coal, or 75% of the country’s total shipments of the fossil fuel, annually by 2020.