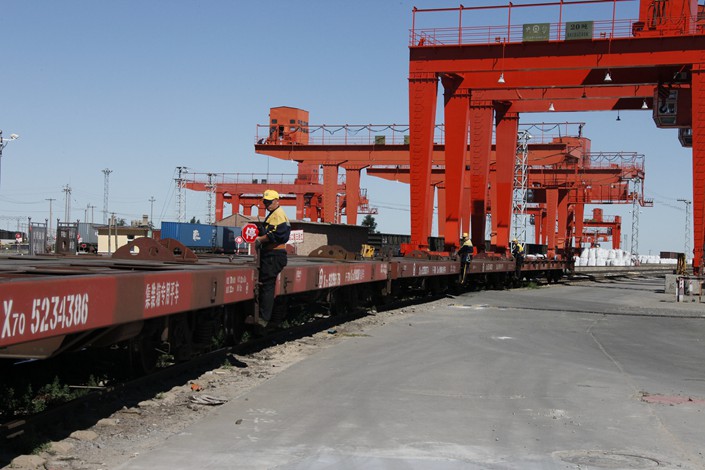 Beijing is crafting a plan to encourage more construction of short connector railways to move goods like coal, ores and other freight between depots and processing centers, in a bid to boost use of the nation’s extensive rail network and reduce pollution, an academic said.

The plan was drafted by China’s economic planner, the National Development and Reform Commission, and is now being considered by the State Council, China’s cabinet, said Zhang Xiaodong, a professor at Beijing Jiaotong University at a conference this week in Beijing. The plan would allow for construction of such short-distance lines using private money — part of Beijing’s efforts to open up the rail network to such outside financing and ownership.

Beijing is on a drive to make better use of its extensive railroad network, the world’s largest, which includes both traditional track as well as a state-of-the-art high-speed network costing hundreds of billions of dollars. Part of the rail-network drive is designed to pay down the network’s large debt, but regulators also hope to make better use of freight shipping to ease road congestion and pollution created by dirtier diesel-burning trucks often used to deliver such freight.

Low profitability has made the nation’s rail operator reluctant to build such short connector railroads, which typically link up factories or other company facilities with logistic centers like ports or major rail freight centers, an official with China Rail Corp. (CRC), the national operator, told Caixin. Even when such projects are proposed, the current procedure is relatively bureaucratic and time-consuming. That can create bottlenecks, for example, for shippers of commodities like coal that need to move those goods short distances from rail yards to ports.

Just 2.9% of the freight in China, equaling about 1.4 billion tons, was shipped using such multitransport networks last year, though the country hopes to raise that figure to 6% by 2020, a government rail official told Caixin. The new connector rail program under consideration would help sharply raise the proportion of such commodities and other freight transported by train in accordance with government plans, officials said.

The plan would be one of the latest aimed at bringing more private investment into China’s rail system as part of a broader campaign to make it more competitive with private delivery companies. Last year, local private equity giant Fosun Group became the first company to sign an agreement to build China’s first privately controlled railway line in coastal Zhejiang province.

In another similar partnership designed to make itself more attractive to its biggest customers, CRC last year signed strategic deals to provide more car-shipping services for two of the nation’s top automakers, FAW Group Corp. and Dongfeng Motor Corp., after new rules were passed that sharply raised prices for truck-based shipping over roads.