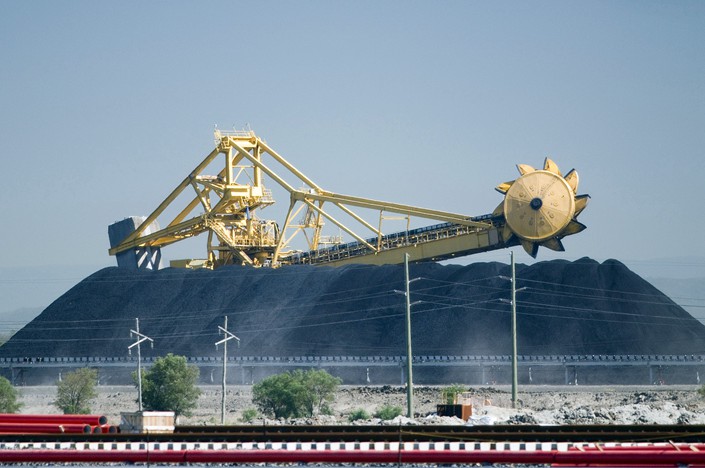 A loading machine towers above an enormous mound of coal at the Port of Newcastle, north of Sydney, Australia. Photo: VCG

*Both nations scrambled to play down claims of a political motive and analysts pointed out Dalian receives just 1.8% of Australia’s total coal exports

(Beijing) — Canberra and Beijing sought to downplay fears that restrictions on Australian imports were linked to tensions in other areas of the relationship, although the market’s jittery reaction betrayed anxieties that China could use its economic clout to get its way.

On Thursday Reuters reported that in the beginning of February the operator of the five ports in the northeastern city of Dalian had banned imports of Australian coal, the latter nation’s biggest source of export income.

The news sparked panic as markets feared that the action marked an escalation in recent tensions between the two countries. The Australian dollar fell by as much as 1.3% on Thursday, before climbing back to A$1.41 to the U.S. dollar as of Friday afternoon. Shares in major coal miners such as Glencore PLC and New Hope Corp. also fell.

China moved to deny the report on Friday afternoon, with foreign ministry spokesperson Geng Shuang telling media that the Dalian ports were “all receiving import declarations for imports of coal including Australia.” He added that China had increased its efforts to check the quality of imported coal.

Australian officials had also sought to downplay the reports, although they also said they had asked Beijing to clarify the situation. “There’s some confusion about what exactly is happening,” said Graham Fletcher, from the North Asia Division of the Department of Foreign Affairs and Trade, in an interview with Australia’s national broadcaster the ABC. “We’ve had detailed consultations with industry bodies here during the course of this month. Some other measures [to limit coal imports] may have been adopted. We’re not hearing that from officials who ought to be in a position in Beijing to confirm that.”

While Australian Prime Minister Scott Morrison told Caixin that his government has “a productive and warm relationship with China,” relations have soured in recent months due to scandals over alleged Chinese political influence in the country. Morrison was sworn in just days after Chinese telecom giant Huawei Technologies Co. Ltd. and peer ZTE Corp. were banned from providing 5G technology to the country.

Many industry analysts doubted that a ban on Australian coal moving through Dalian’s ports would be directly intended to cause Australia harm, given they receive just 1.8% of Australia’s total coal exports. “A long-term ban is unlikely,” said Wood Mackenzie’s research director Robert Griffin, as it “would have enormous implications for markets in both countries.” China would struggle to find domestic replacements for Australian coal, and while other coal varieties could be used, they would be less efficient and more environmentally damaging than the variety imported from Australia, he added.

Yet while restrictions on Australian coal imports through Dalian might not be significant in themselves, their effect on the Australian dollar “shows just how anxious the markets are that China could use its economic heft to disrupt other economies,” said Hannah Cotillon, a political risk analyst at London-based consultancy AKE International.

“While many have suggested that the Dalian restrictions are Beijing’s way of reminding countries that it can hurt them if it chooses to, it is also a reminder to Beijing itself that potentially innocent policy decisions it makes could have unexpected geopolitical ramifications, by accidentally upsetting markets.” she said. “Diplomatic misunderstandings are just as harmful to China’s interest as to other nations,” she added.