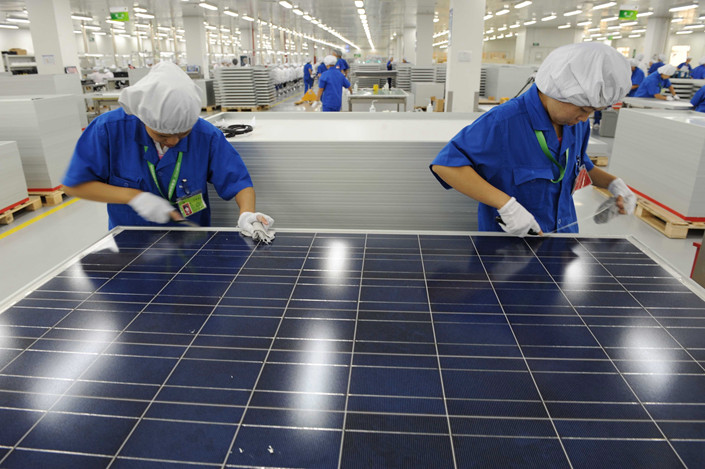 Workers are seen at a solar-panel maker in Hangzhou, Zhejiang province, on Aug. 26. Photo: IC

Despite clouds on the domestic horizon last year, China’s solar-panel makers still eclipsed their rivals on the international stage, with nine of the top 10 biggest panel exporters coming from China, a report has found.

After a strong start to 2018, the solar industry was thrown into disarray on May 31 when the government unexpectedly announced it was pulling the plug on new subsidies for solar projects for the rest the year, prompting panel orders to be slashed and shares to slide at several major industry leaders where layoffs loomed.

But the disruption of what became known as the “531 policy” has not caused the country’s solar industry’s star to wane, new data from consultancy PV Info Link Shows. It found that Chinese companies still comprised nine of the top 10 solar panel exporters in 2018. Together, the top 10 account for 66 gigawatts (GW) of the 91.5 GW of the solar panels shipped last year, a market share of 70%.

The New York-listed JinkoSolar Holding Co. Ltd. shined the brightest, with its panel shipments surpassing 11 GW for the year. Figures for the other leaders were not provided, but JA Solar Holdings came in second, while South Korea’s Hanwha Q Cells Co. Ltd, the only non-Chinese company in the top 10, tied with Trina Solar Ltd. for third.

Chinese-Canadian company Canadian Solar Inc. has a claim to be counted as North America’s sole representative in the top 10, which came in as the sixth-largest exporter.

“The ranking is pretty in line” with expectations, said Alex Liu, an equity research director focusing on renewables at UBS AG, adding that “at the supply side, Chinese solar manufacturers have already controlled most of the capacity globally along the value chain.”

PV InfoLink anticipates that 2019 will be another good year for solar-panel makers, with demand likely to rise to 112 GW. The clouds over China’s domestic solar farms also appear to be lifting, with the National Development and Reform Commission, the top state planner, announcing earlier this month that it will launch subsidy-free solar pilot projects that should make solar power competitive with coal for buyers.

Another bright spot for the industry came at the close of last year, when a new 500 MW solar base in Northwest China’s Qinghai province was connected to the grid, supplying electricity at 0.316 yuan (4.65 U.S. cents) per kilowatt hour (KWh), cheaper than the 0.325 yuan per KWh benchmark for coal, the official Xinhua News Agency reported. This makes it China’s first major solar plant to establish a price cheaper than coal, Robert Rohde, the lead scientist at research group Berkeley Earth, said on Twitter.