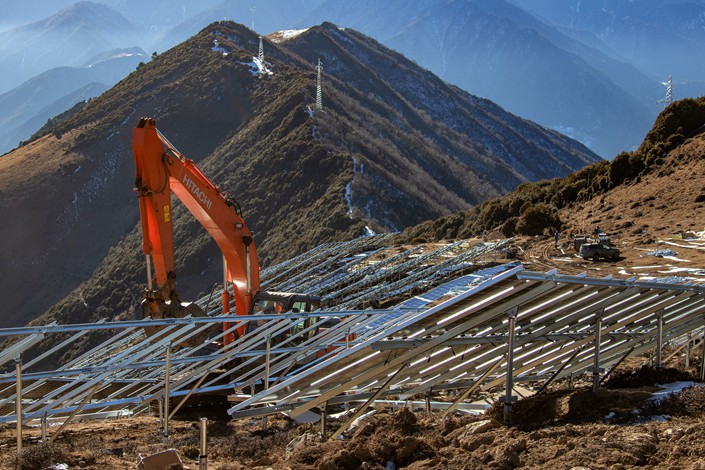 A 30-megawatt photovoltaic poverty alleviation project that was successfully connected to the power grid in Jinchuan county, Sichuan province, is seen on Nov. 1. Photo: IC

China added 43 gigawatts (GW) of new solar capacity in 2018, despite the government pulling the plug on its generous subsidy program, with analysts now expecting clouds looming over the industry to clear.

The country is a leader in solar technology, investing heavily in renewables research and production in the search for a greener alternative to heavily polluting coal power. Installed solar capacity jumped more than tenfold from 16.23 GW in 2013 to 174 GW at the end of last year.

Yet analysts expected the rate of growth to slow after the government unexpectedly froze generous subsidies for new plants midyear. The government announced on May 31 that it would not grant subsidies to any new solar projects for the rest of the year, prompting shares to slide in several major industry leaders as the threat of layoffs loomed.

As expected, growth fell 18% year-on-year in 2018, with 43 GW being installed across the country, Li Qionghui said at an industry event on Thursday. Li heads the New Energy and Statistical Analysis Institute, a research unit under state-owned utility behemoth State Grid Corporation of China.

But the drop was not as steep as many had expected. Wang Bohua, secretary-general of the China Photovoltaic Industry Association, had predicted that newly installed capacity would fall to 30 GW to 35 GW in the summer.

China’s earlier boom in installed capacity was largely driven by the system of generous subsidies the government introduced to protect domestic solar-panel makers after the U.S. and EU placed anti-dumping measures on Chinese solar products due to state-supported companies allegedly flooding the market.

Yet while energy demand was growing overall, a lack of coordination with the state grid led to much of the new potential energy going to waste, with Northwest China’s Xinjiang Uygur autonomous region losing 32% of the energy generated by solar power in 2015.

The government has also struggled to provide operators with promised subsidies, with the subsidy gap standing at around 60 billion yuan ($8.9 billion), Wang said at Thursday’s event. This has left several companies under severe financial strain.

The future appears to be brightening, however. The National Development and Reform Commission, China’s top planning agency, announced earlier this month that it will launch pilot solar and wind projects that will not receive national government payments but will be able to sign long-term power purchase agreements with grids at fixed tariffs.

The policy has not been clarified, but there is an expectation that local governments will be made to reduce taxes and land costs for solar projects, and banks will be encouraged to free up funds to support projects that reduce curtailment of renewable-generated energy. The NDRC announcement also raised expectations that a new grid parity program will ensure renewable energy will be as least as cheap as coal power for local governments.

“The government was surprised by how badly the rooftop-subsidy cut hurt equipment manufacturers,” an investor relations manager who represents several solar companies told Caixin. “I know that over time they want all the installed capacity to be unsubsidized, but I think it was an unintended consequence that it wiped out demand for equipment. So they had to quietly backpedal and provide some additional support.”

Alex Liu, an equity research director focusing on renewables at UBS AG, said, “While operators are still facing issues with delayed subsidy payments, their situation should improve this year thanks to the grid parity policy, with policies to support new projects likely to be announced very soon, and there should be a solution to the problem.”