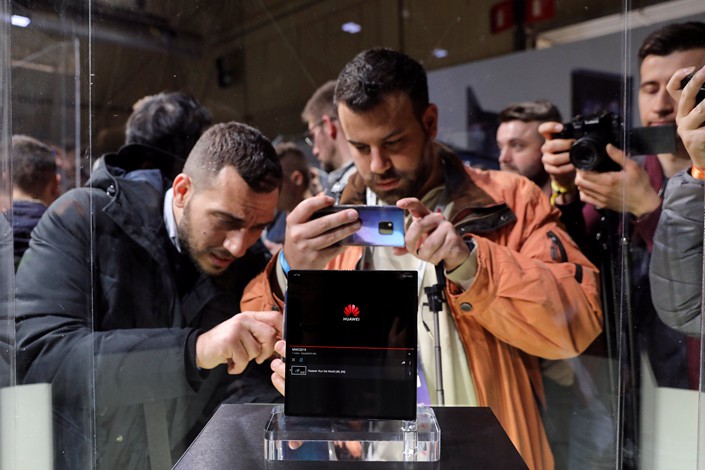 *Huawei launched the foldable, 5G-compatible Mate X on Sunday, ahead of a major industry event this week. The following day, Xiaomi showed the world its first handset with a built-in 5G modem

*However, some are skeptical of 5G’s current commercial value, with a senior Oppo executive saying that the handsets are just a way for companies to “show their muscle”

(Beijing) — Fifth-generation (5G) mobile technology was a major selling point for several Chinese tech companies as they rolled out their product offerings ahead of the annual Mobile World Congress in Barcelona this week.

The highly-praised foldable Mate X, launched on Sunday by Huawei Technologies Co. Ltd., supports next-generation 5G networks and is expected to enter the market in the middle of this year. Mi Mix 3, unveiled by Xiaomi Corp. the day before, is the Chinese company’s first smartphone that comes with an inbuilt 5G modem. Deliveries are expected to start by May.

The promise of 5G for mobile phone users is that the wireless technology will bring speeds of around 10 gigabits per second. The Mate X is touted as being able to download a 1 gigabyte movie in as little as three seconds. This has been widely seen as an element in propelling the currently sluggish smart-phone industry, which has been lacking major innovation over the past few years.

However, not all Chinese smartphone-makers are enthused by the 5G hype. Shen Yiren, a vice president at Oppo, another top Chinese mobile phone seller, told reporters in Barcelona that it will take at least two years before 5G phones are truly valuable to ordinary consumers.

The current flock of 5G phones are more a way for handset-makers to “show their muscle,” Shen told media, adding that the biggest obstacle is the lack of supporting infrastructure.

Governments and mobile carriers around the world have been racing to build 5G networks. In China, carriers will start testing commercial-quality 5G wireless services this year, but national commercial networks will not be available until 2020 at the earliest.

Oppo has nevertheless jumped on the bandwagon. The company announced it would launch 5G handsets by the second quarter of this year, targeting overseas markets first, including Australia, Singapore, and Switzerland.

As 5G high-speed networks are still far from the hands of mass consumers, device-markers have focused on innovating the structure of phones to energize the market.

Mate X is a handset-tablet hybrid with a single, wide screen that folds in half when closed. Its rollout came about a week after South Korean rival Samsung Electronics Co. Ltd. revealed the Galaxy Fold, which is also foldable, at a similar price tag of $1980.

Such a high price, along with bulkiness, shorter battery life and a lack of supporting apps, prompted some industry analysts to argue the innovation is year away from mainstream appeal.

Oppo’s Shen Yiren voiced similar skepticism. “Some foldable phones just fold for the sake of it,” he said, adding that his company had planned a foldable phone rollout for the Mobile World Congress, but abandoned the plan after deciding such phones would not be commercially valuable for two or three years.