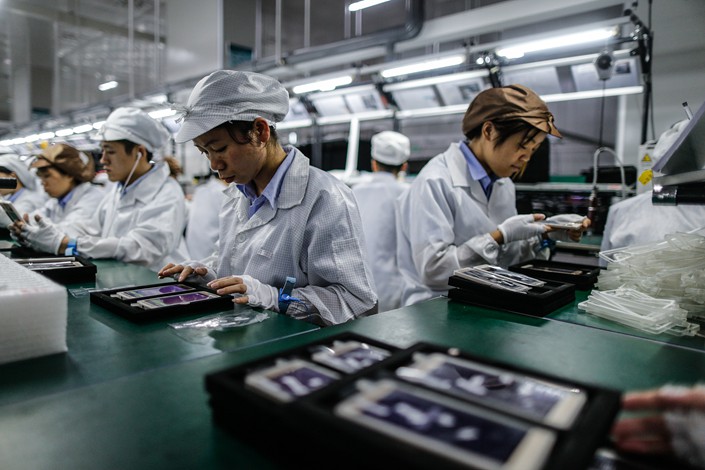 “In 2019, we will face the most challenging time yet,” proclaimed Lei Jun, founder of Xiaomi Corp., at the company’s annual party on Jan. 11. “It’s a fact that global smartphone shipments have become lackluster.”

Xiaomi is the world’s fourth-largest smartphone-maker, with a global footprint that includes Indonesia, India, the U.K., Sri Lanka and Russia, and trailing behind only Samsung Electronics Co. Ltd., Apple Inc., and hometown rival Huawei Technologies Co. Ltd. in the global rankings.

China is the world’s largest smartphone market, accounting for nearly a third of the worldwide total. Strong domestic demand has given rise to a spate of Chinese brands that also include Oppo, Vivo, Smartisan, Gionee, Meitu, TCL and Tecno, just to name a few.

But market saturation has recently taken a toll on the industry, especially smaller players, and observers expect consolidation to accelerate this year. In 2018, total smartphone shipments in the country fell 16% to 390 million units, according to the China Academy of Information and Communications Technology.

Here are some key things to know about China’s smartphone market.

1. It could be the end of the road for some brands

Founded in 2002, Gionee was one of China’s earliest handset brands to find success overseas. In 2016, the company’s production peaked at 40 million units, ranking No. 5 among domestic phone manufacturers that year. However, news that the company was in a dire financial state emerged in December 2017, as it lost market share to rivals with savvier marketing, and its chairman reportedly gambled away billions of yuan of company funds.

Smartisan, a one-time sector darling, also had a turbulent 2018. Its founder, Luo Yonghao, stepped down as legal representative of the company in December, fueling further speculation the company is in deep financial trouble.

The same month, a Beijing court froze Smartisan’s 4.5 million yuan of bank assets after one of its business partners sued the company for potential payment defaults.

The 4-year-old Smartisan has positioned itself as a manufacturer of high-end phones for big spenders, boasting handsets developed by former Motorola engineers and a former Apple designer.

2. Suppliers are struggling too

As brands grapple with the downturn, their component suppliers have also taken a hit.

Suppliers told Caixin there was a clear decline in demand beginning in 2017, with factories idling, laying off workers, and even shutting down.

A supplier in Shenzhen told Caixin half of its production facilities are not operating after its main client, Gionee, has delayed payments. Another company with a workforce of 700 in neighboring Dongguan has temporarily closed shop, while other suppliers said they have been unloading assets.

3. What caused the headwinds?

Overcapacity is the culprit, according to market observers. Only so many handsets can be sold in a year, and with replacement demand needed to prop up shipments, the industry is slated to go downhill, said Sun Yanbiao, director of the Mobile No.1 Research Institute.

China’s handset supply chain has matured after more than a decade of development. But after companies and suppliers recklessly expanded their production capacity during the boom years, they have been saddled with idle capacity during the industry downturn, Sun said.

Take Gionee. It launched a Dongguan manufacturing plant in 2010 that was able to churn out 80 million handsets a year, and it later planned to build two more new plants. Gionee’s shipments peaked at 40 million in 2016.

4. Diving into the blue oceans

To weather the potential downturn, Oppo Electronics Corp. is branching out from its core smartphone business into internet-connected smart devices.

Oppo announced Monday it has set up a unit to target non-smartphone devices such as watches, headsets and a family of connected technologies that make up the internet of things (IoT).

With the establishment of the new unit, Oppo is following similar moves by peers such as Xiaomi and Huawei. In November, Xiaomi announced that its key areas of future growth will be artificial intelligence and the IoT, as the smartphone-maker saw handset sales decline.

Yes, according to industry watchers and players. But the next-generation mobile network will not be able to take off for a few years.

“5G’s speed will be much faster (than the current 4G.) When you access documents in the cloud, it will take a split second,” Liu Zuohu, founder of handset brand OnePlus, told Caixin. But he said these lightning-fast experiences will be realized only after three years.

Faster speed aside, 5G will be able to enhance emerging applications such as artificial intelligence, augmented reality and virtual reality, which will greatly benefit end-users. Market watchers said they look forward to 5G killer apps — similar to the omnipresent mobile payment apps WeChat Pay or Alipay on 4G — revolutionizing the user experience.

Lei of Xiaomi believes that 5G will create demand, as users upgrade their phones. But he stressed at the January event (link in Chinese) that widespread 5G commercialization will take at least two years.

Qin Min and Mo Yelin contributed to this report.