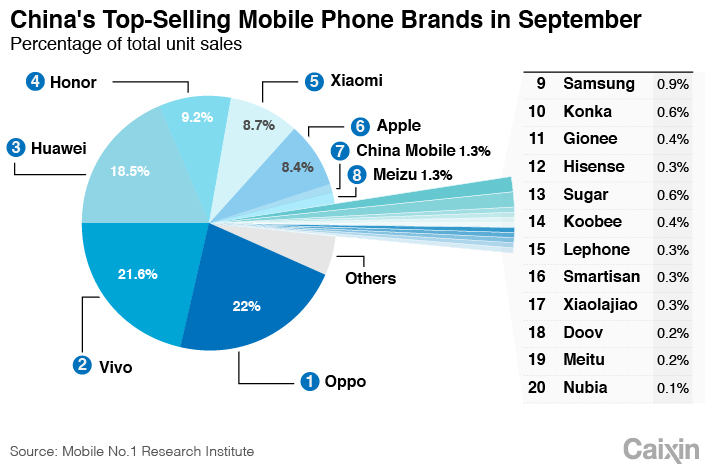 * Second-tier smartphone-maker Gionee has defaulted on a $68.9 million bond, announcing a day later that it didn’t have the funds available to pay the interest

* Another smartphone-maker, Qiku, has disbanded its research and development team

(Beijing) — The consolidation of China’s smartphone market is beginning to squeeze the sector’s smaller players — some of whom are either scaling back their ambitions or facing bankruptcy.

While lower-tier brands have hoped to break the dominance of sector leaders such as Xiaomi, Huawei, Vivo and Oppo — their sales have suffered recently and analysts are not optimistic about their chances.

Shipments for brands outside the top five plummeted 53.9% during the third quarter, giving that group of more than a dozen brands less than a quarter of the overall market as the sector consolidates.

Gionee Communication Equipment Co. Ltd. is in talks with creditors, including Ping An Bank and the Industrial and Commercial Bank of China Ltd. over a possible bankruptcy reorganization plan, a source told Caixin. The phone-maker will be given some breathing space, as it will be protected from its creditors while a court reviews and approves a specific reorganization plan.

This comes after the Shenzhen-based firm defaulted on its only bond, worth 480 million yuan ($68.9 million). Its second annual interest payment of 65 million yuan was due on Oct. 29 and Gionee announced the next day that it didn’t have the funds available to pay the interest and wouldn’t be able to repay the principal if investors wanted to cash out.

Gionee has been one of the most internationally oriented Chinese smartphone brands, being one of the first to break into the Indian market that has since attracted many of its rivals such as Xiaomi Corp., which recently floated shares in Hong Kong.

But the company has stumbled in the past year as it was overtaken in India by the more market-savvy Xiaomi, and sales in its home market slipped. In the third quarter, Gionee saw its global smartphone shipments slump nearly 99% year-on-year to just 60,000 units, according to data tracker IDC.

In January, Chairman Liu Lirong acknowledged that the company’s finances are in a dire state after excessive spending on investment, operations and sales in 2016 and 2017. Caixin understands that Gionee is saddled with 20 billion yuan of debt and has been laying off staff this year.

Caixin reported in September (link in Chinese) that Liu, who holds an over 40% stake in Gionee, has been laying low in Hong Kong since the financial crisis began and he subsequently failed to bring in new backers.

The layoffs took place in late September, but their size is still unknown. Along with its Shenzhen facility, the Xi’an center was key to Qiku’s development of handsets, smart wristbands and car navigation systems.

In a reply to Caixin, Qiku said the company was undergoing restructuring and some Xi’an-based workers had been reassigned and relocated to Beijing or Shenzhen. Those unwilling to accept their new roles will be compensated.

“The current mobile phone technology is very mature and models being sold in the market now are quite similar,” said Wang Yanhui, secretary-general of the Mobile China Alliance trade association.

“The fittest survivors ought to have advantages in branding, sales channels and supply chain, and this is mostly in the hands of bigger brands,” he said.

Coco Feng contributed to this report.