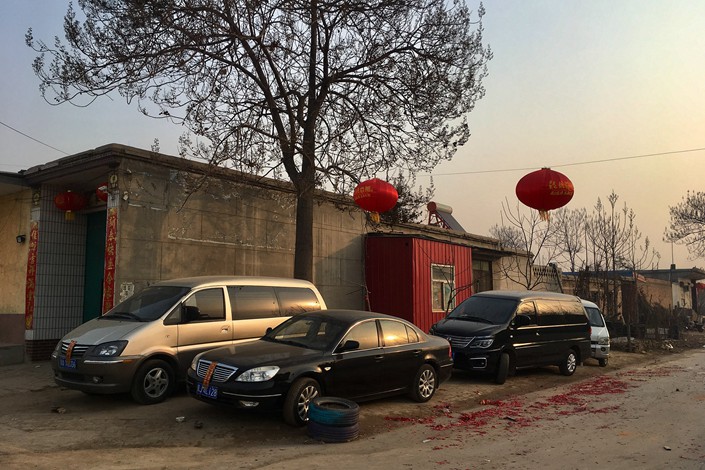 New cars parked in a rural street in Hebei province during the Lunar New Year in February. Photo: VCG

As a Guangdong native based in Beijing, traveling home has always been a tortuous journey.

The much-lauded high-speed train from China’s northern capital to the southern metropolis of Guangzhou, which shortened the roughly 2,298 km (1,428 mile) journey to just 8 hours, is only the beginning of my trip. I then take a five-hour intercity bus, and finally a one-hour coach to reach my hometown, a remote village in the western part of Guangdong some 400 kilometers from the capital.

But travelling home for the Lunar New Year was a slightly more relaxing experience this time around. The last leg of the journey was replaced by my father’s car — one he has been bragging about over the phone to me since he bought it last year.

My father earned his living as a farmer, growing bananas and tropical fruit like lychees and longan. Now he is one of the few in our village of about 1,000 people who owns a car.

“I never thought I’d be able to purchase a car before I was 60 years old,” he said from behind the wheel of his second-hand Toyota after picking me up at a bus station in downtown Gaozhou. “It’s like I’ve reached the high-point of my life.”

This conversation, and my other observations during a 10-day visit home, seemed at odds with the fact that China’s auto sales just posted their worst yearly performance in 28 years. Industry experts say the market downturn will continue.

It seemed like everyone in my village wanted to discuss their plans to buy a car. “Cars are a symbol of one’s identity,” my aunt said when we visited her family. I discovered how my father’s new car had helped him gain “face,” and how good it made him feel.

The slump in the Chinese auto market was chiefly caused by slower growth in smaller cities and towns as their disposable income dropped, according to the China Association of Automobile Manufacturers.

But in my view villages are a massive “blue ocean” market which automakers should set their sights on. Half of the Chinese population — 600 million — live in such villages. And according to the National Bureau of Statistics, the wallets of rural people are fattening at a pace that far outstrips their urban peers.

The authorities have taken note of farmers’ potential purchasing power. In a document published by the country’s top economic planner in January, car consumption in rural areas placed high on the list of measures to battle China’s economic slowdown. The proposed incentives include direct subsidies to farmers, though there was little in the way of detail.

Such policies have, however, stoked fears that the government may again adopt what critics call distorted incentives to intervene in the market in China’s highly mature auto sector.

Subsidies of billions of yuan alongside tax cuts helped China overtake the U.S. as the world’s largest auto market in 2009. But industry observers say expecting a repeat of such efforts would be unrealistic given the government’s tight fiscal budget. They also say that the current auto market slump is the result of government’s years of reckless spending to shore up growth figures.

Most of the villagers I talked to had no idea about potential future incentives. “If the government can help pay part of the cost, that would definitely be a good thing,” one relative said.

One obstacle to promoting the purchase of cars in villages is the lack of available sales networks. Instead of dishing out direct subsidies to farmers, governments should consider supporting automakers to expand 4S stores (sales, showrooms, services, and spare parts) into town centers, as they are currently limited to major cities.

Also, villagers seem receptive toward used vehicles and don’t necessarily have to buy new ones. Innovative used-car platforms could be used to reach China’s rural masses.

For the people of Gaozhou, a sprawling town where the vast majority of people are rural farmers, owning a car can mean something else — dignity and independence. The difference between staying out downtown late at night, or racing to catch the last rural bus at 7 p.m. for a 35 kilometer journey back to the village.

One night, after watching the new hit sci-fi blockbuster “The Wandering Earth,” my father exclaimed excitedly: “The movie was so good! Now I feel like a real city person.”