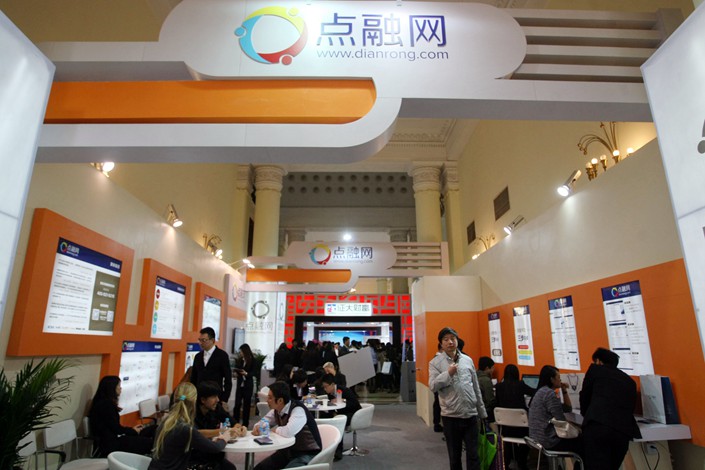 People visit Dianrong's stand during an exhibition in Shanghai in November 2013. Photo: IC

* Employees of Dianrong, a leading P2P lending platform, have taken to social media to complain of late wage payments and one of the founders confirmed it has shut 70% of its branches

* The founder says the closures were to comply with regulations, but an industry source said cash flow problems also contributed to the decision

Dianrong, a star peer-to-peer (P2P) lending platform in China similar to U.S. giant LendingClub, has recently made headlines with its struggles to pay employees and the massive shutdown of its offline stores, reflecting the country’s further crackdown on the industry.

Established in 2012 by Soul Htite — co-founder of the world’s largest online lender Lending Club — and private equity fund partner and former lawyer Kevin Guo, Dianrong is widely considered a star P2P lending platform in China. It has pocketed investments from the GIC and Standard Chartered Bank, with the latter spending nine months on due diligence, according to Guo.

The once glamorous online lender, which is controlled by Sinolending Ltd., however, has been struggling with a cash shortage. Multiple employees posted on Weibo, China’s most popular microblogging platform, that the company did not pay them on time. Dianrong has also closed about 70% of its brick-and-mortar locations, leaving only 30 still open, Guo said.

Prior to the closures, Dianrong’s assets were mostly loans to small and midsize enterprises, mainly arranged offline, at an average amount of 80,000 yuan ($12,000) to 100,000 yuan, a source close to Dianrong told Caixin. Such loans accounted for about 70% of Dianrong’s assets, said the source, adding that the company’s online loans amounted to only 10% of its assets.

The purpose of the office closures, Guo said, was to comply with the regulator’s guideline to reduce P2P lenders’ physical presence. The company’s cash flow problems and the high cost of physical locations also contributed to Dianrong’s store shutdown, a source in the industry told Caixin.

The move, however, could inadvertently increase the amount of soured loans that Dianrong has on the books, said another source in the industry. Physical stores tend to have more control over borrowers. Losing them could make it harder for the platform to collect debts, the source said. Dianrong had nearly 10.4 billion yuan of outstanding loans as of January, according to data (link in Chinese) from its website.

Guo disputed this conclusion. “Although we reduced the number of stores, we still have quite a few customer service personnel. There will be no deterioration in the quality of the assets,” he said.

In 2017, Dianrong started to work to balance out both its online and offline businesses, Guo said. “It’s indeed harder to manage physical stores,” he said, adding that the offline-focused strategy would not work as the regulators have yet to recognize the P2P sector.

Since last year, China’s regulators have been putting a lot of effort to bring the loosely regulated industry to heel after a string of scandals and fraud. As of the end of January, 2,687 P2P platforms had had difficulties meeting cash withdrawal demands, saw their owners abscond with investor funds, or were investigated by police, according to data (link in Chinese) compiled by P2P research platform Wangdaizhijia.

The number of platforms in operation fell by more than half to 1,066 last month from 2,282 in January 2018, with no new platforms opening in the last six months, the data showed.