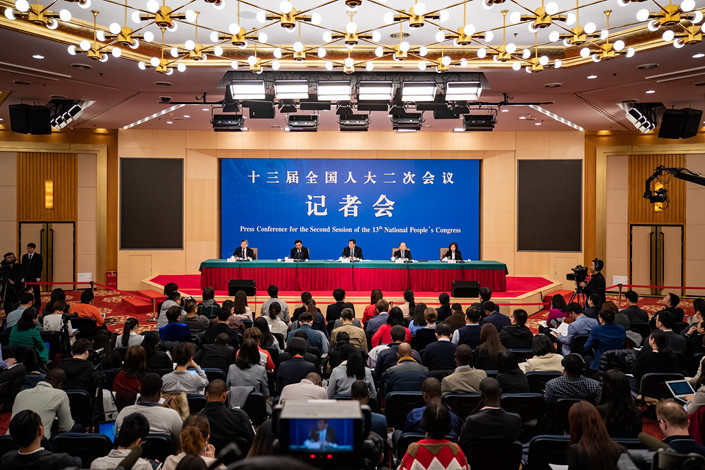 A press conference at the second session of the 13th National People's Congress in Beijing on Wednesday. Photo: VCG

* However, questions remain about whether such companies achieve improvements to their governance structures and internal operations

(Beijing) — Private sector entities are allowed to hold a controlling interest in state-owned enterprises (SOEs) in certain highly competitive industries as a part of mixed-ownership reform, and they are also welcomed to invest in SOEs in certain “key” industries, according to an official at China’s top economic planner.

It was not clear which industries the plan views as “highly competitive” or “key.”

The government will also intervene less in electricity generation and consumption for industrial and commercial use, push forward the construction of the power distribution network at the county level, and improve the operation of the gas and oil network to make sure upstream energy enterprises have fair access, said Lian Weiliang, a deputy director at the National Development and Reform Commission, speaking at a press conference Wednesday.

Companies mainly involved in highly competitive industries have undergone the highest rate of mixed-ownership reform, at over 73%, and the nonprofit sector had the lowest rate, according to an official at the State-owned Assets Supervision and Administration Commission (SASAC) of the State Council speaking in early 2018.

This isn’t the first time that government officials have said the private sector could take over certain SOEs. The government could exit SOEs that didn’t hold special importance to the economy, Huang Shuhe, a former deputy director of SASAC, said at a press briefing in December 2013.

The mixed-ownership reform program, which began in 2013, aims to bring private-sector investment and management techniques into state sector firms. The program aims to improve the efficiency of industries dominated by the state sector, such as power, oil, railways and telecommunications. However, experts have questioned the effectiveness of the program, saying most of the projects involved have not seen an improvement in the governance structure of companies and their internal operations.