By Huang Rong and David Kirton 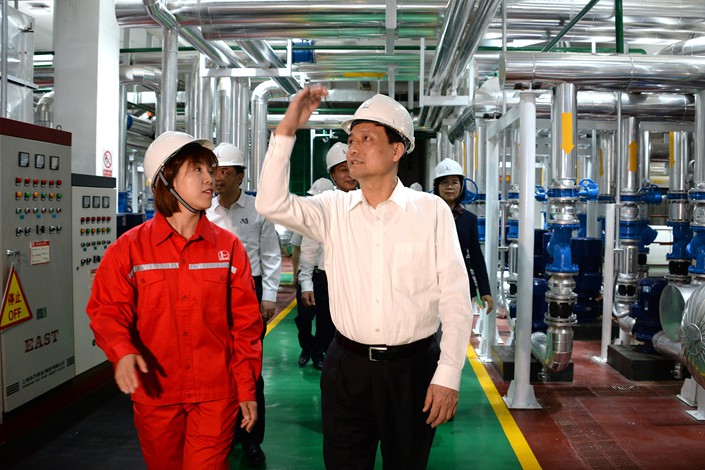 The overseer of China’s 90-plus biggest state-owned giants has restated the case for public and private companies working together, although doubts remain about whether the state really intends to compete on a level playing field.

Both China’s state-owned enterprises (SOEs) and the private sector are facing the same economic challenges and should work together to push supply-side reforms that increase consumer demand, Xiao Yaqing, director of the State-owned Asset Supervision and Administration Commission (SASAC), said in a keynote address at the private-sector dominated Yabuli China Entrepreneurs Forum on Friday.

“There are many commonalities between developments at state-owned enterprises and private enterprises … and there are a lot of opportunities for cooperation and broad space for cooperation,” he said. The aim is not to take away competition between the sectors as “without competition, it is not a market economy. But in the face of economic globalization … strengthening cooperation [between the public and private sectors] is the general trend.”

While the SOEs that SASAC oversees reaped record profits amounting to a combined 1.2 trillion yuan ($177.7 billion) last year, they enjoy heavy government subsidies and are less efficient than their private-sector peers, which have less financial support if business turns sour. The SOEs returns on capital tend to be half those expected of private firms.

In a bid to improve efficiency Beijing is encouraging “mixed ownership,” inviting private sector investors into SOEs’ subsidiaries and encouraging consolidation, particularly in the areas of heavy industry where the state tends to dominate. But progress has been slow, partly as private companies and investors have remained skeptical over the degree of control and influence they will have over their state-sector partner’s decision-making.

Another major challenge to encouraging mixed ownership is that SOEs, as a throwback to China’s pre-reform planned economy days, they are also responsible for guaranteeing employment and providing a greater degree of benefits for their employees, whereas private sector companies are free to pursue profits over employee wellbeing. When an SOE merges with a less competitive peer, “who can bear the responsibility of letting tens of thousands of people be made unemployed?” Zhou Zhuping, the boss of Siyuanhe Equity Investment Management Co. Ltd, recently told Caixin. This tends to put off private sector investment.

Doubts also remain over the state sector’s willingness to compete fairly with the more-productive private sector. “I think SASAC’s reform is for real, but so far it seems to be a one-way reform, with SOEs expanding into the traditionally private realm, not the other way around,” said Ning Leng, a China public policy postdoctoral fellow at Harvard University’s Ash Center.

SOEs are also expanding in a different way than they did before, Ning said. “In the past, SOEs usually chose to compete with the private firms — for example China Telecom’s effort to build a chat app to compete with WeChat. But now we see SOEs being more aggressive and direct, and ‘offering’ to joint-venture with successful private firms rather than competing with them,” she added.

Yet it remains difficult to measure their success at this stage, with reforms still very much a work in progress, Adrian Wood, a professor emeritus of international development at the University of Oxford, recently said in a piece for Caixin.