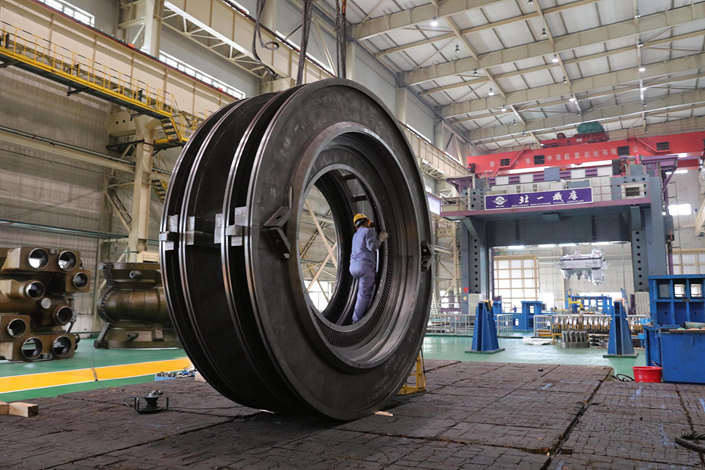 Xiao Yaqing, director of the government’s State-owned Asset Supervision and Administration Commission (SASAC), held out the olive branch at a forum on the sidelines of the China International Import Expo (CIIE) in Shanghai. SASAC directly oversees the country’s nearly 100 centrally administered state-owned enterprises (SOEs), which had combined assets of 76.2 trillion yuan ($11 trillion) at the end of 2017.

Beijing has been pushing hard to shake up the stodgy state-run sector by bringing in outside investors and encouraging consolidations. Under the “mixed-ownership reform” initiative, dozens of SOEs have unveiled plans to invite private sector investors into their subsidiaries.

In September, the National Development and Reform Commission published a statement encouraging centrally administrated SOEs to explore feasible paths for mixed-ownership reforms at the highest corporate levels, marking the first official call for such sweeping reform of central SOEs.

Since 2014, SASAC and other ministries have orchestrated more than a dozen mergers in various sectors that involved more than $1 trillion in assets as part of a campaign to consolidate state assets. As of June, there are 96 central SOEs under the direct supervision of SASAC, down from 106 at the end of 2015, after several mergers and acquisitions.

China’s central SOEs have been pointed toward market-oriented reforms, seeking to deepen reforms while insisting on openness to actively embrace the global market, Xiao said Tuesday.

Central SOEs have invested in an array of international projects in infrastructure, energy and equipment manufacturing under the Belt and Road Initiative, Xiao said. Most SOEs have set up ventures with foreign investors and have been seeking to expand cooperation in supply chain and trade with foreign partners, he said.

The week-long CIIE opened in Shanghai this week with attendance of high-level officials. Chinese authorities hoped to use the event to showcase the country’s willingness to import more and further open up its markets against the backdrop of the trade war with the United States.