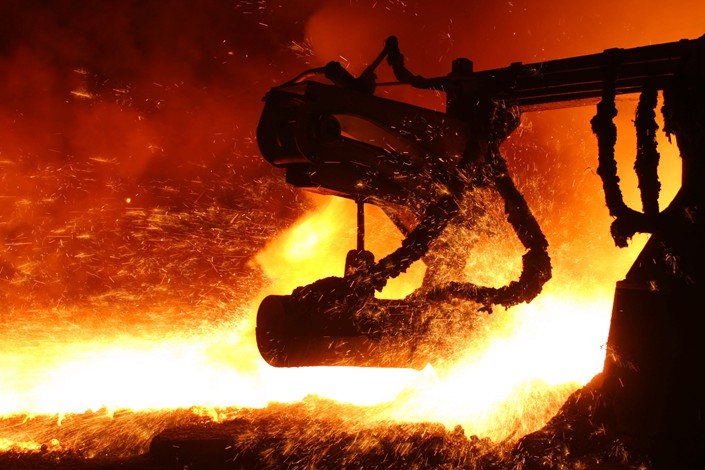 Steel is made at a Chongqing plant in October 2014. Photo: VCG

Most projects under the government’s program to attract private investment into the lumbering state sector are failing to bring meaningful changes to how the inefficient companies work, the boss of a state-private investment fund set up to salvage underperforming assets said.

Siyuanhe Equity Investment Management Co. Ltd, also known as Four Rivers Investment Management Co., was set up in April 2017 with 40 billion yuan ($5.9 billion) to 80 billion yuan to invest in underperforming assets. It has overhauled money-losing Chongqing Iron & Steel Co. Ltd., turning it from a company on the brink of bankruptcy into a streamlined operation that took in a net profit of 1.48 billion yuan in the first three quarters of last year, highlighting a path for other mixed-reform efforts.

Yet other mixed-ownership efforts are not going so well, according to Zhou Zhuping, Siyuanhe’s CEO and the chairman of its investment board. Speaking to Caixin, Zhou said most efforts “have only mixed results, but not reformed” struggling state-owned enterprises (SOEs) in fundamental ways.

Mixed-ownership reforms aim to allow private-sector investment and management into state sector firms. But according to Zhou, many efforts “have only made a mix at the capital level. They have not carried out mixed reforms regarding the governance structure of companies and their internal operations, and still follow the old form of an SOE,” he said. “Or, the company takes on the full operations of a private enterprise, but this loses the basic meaning of the mixed change.”

The Chinese government is struggling to deal with “zombie” companies — unprofitable state-owned enterprises that would go out of business without ongoing bank loans or government support. Economists generally see them as a drain on the financial system and the economy as a whole.

Beijing has been pushing hard to shake up the stodgy state-run sector by bringing in outside investors and encouraging consolidations. Under the “mixed-ownership reform” initiative, dozens of SOEs have unveiled plans to invite private sector investors into their subsidiaries. But progress has been slow, partly as private companies and investors have remained skeptical over the degree of control and influence they will have over the state-sector company’s decision-making.

Siyuanhe is regarded as having set a good example of how mixed-ownership reforms could work. The company involves a mix of private and state capital, with WL Ross & Co. LLC, founded by Wilbur Ross — now the U.S. commerce secretary — holding a 26% stake; SOE China Baowu Steel Group Corp. Ltd. and the U.S.-China Green Fund each owning 25% stakes; while state-owned China Merchants Group Ltd. holds 24%. “This design is based on the fact that the four shareholders hope the fund will operate and grow in a market-oriented manner, and shareholders will support it in a market-oriented manner,” Zhou said.

Chongqing Iron and Steel struggled in the years after the global financial crisis, with accumulated losses of 23.8 billion yuan between 2011 and 2016. The company’s liabilities equaled 103% of its assets at the end of September 2017, just before Siyuanhe invested and became its majority stakeholder.

It gradually divested inefficient assets, split its operations, carried out debt restructuring, held fresh elections for its board of directors, and introduced professional managers. As of the end of September, Chongqing Iron and Steel had a total debt of 8.31 billion yuan with total assets of 26.53 billion yuan, and the asset-liability ratio had fallen to 31.3%.

Zhou said the biggest challenge Chongqing Iron & Steel faced was the lack of rule of law. “At present, China is not market-oriented enough, and the rule of law is not strong enough. Without these two aspects, the situation is much more complicated,” he said. “There is still a long way to go.”

Zhou believes the government needs to let the markets take a more meaningful role in reforms if they are to be successful, especially when it comes to dealing with unprofitable companies or units that should be closed. “After a merger, who can decide, who can bear the responsibility of letting tends of thousands of people be made unemployed? This has to be left to the market. The market will judge a company’s worthiness to survive.”