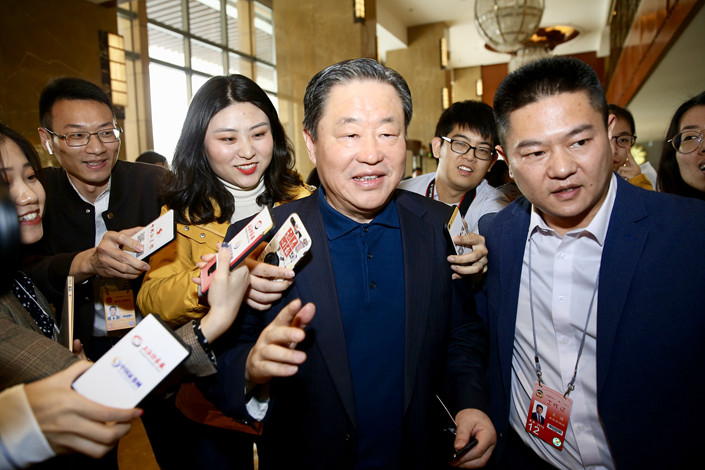 Chemicals giant Sinochem Group Co. Ltd. said the state sector will have to hand over more of its profits to the government in order to support wider tax cuts, in comments that signal the role state-owned enterprises (SOEs) will play in the country’s fiscal reshuffle.

The Chinese government is planning to cut nearly 2 trillion yuan ($298 billion) in taxes and social security contributions to shore up growth, Premier Li Keqiang said in his annual government work report this week.

Commenting on the report, Sinochem boss and China People’s Political Consultative Conference (CPPCC) member Frank Ning said that the government will have to offset lost revenue from taxes from other areas, such as by increasing the share of SOE profits making their way into government coffers. The state sector will need to make sufficient profit for the tax cuts to take place, and to be able to stimulate economic development while they drive through industrial restructuring and upgrades, he said.

“How do we build a better society? In a better society, we all become more efficient,” he said. But SOEs are largely the opposite of this, he added, pointing out that while the state sector has around 180 trillion yuan ($26.8 trillion) in total assets, and net assets of around 50 trillion yuan, returns on capital tend to be a withering 4-5% — much lower than in the private sector. The state sector’s average asset-to-liability ratio hovers around 65-70%, much higher than the private sector.

While China’s state sector has reformed incrementally over four decades of liberalization, Beijing has in recent years focused on reducing the burden of ‘zombie’ SOEs — those incapable of surviving without access to generous state support. The government is also looking to merge less efficient companies into fewer, better run “national champions.” Ning’s comments imply an additional emphasis on SOEs supporting the state, rather than the opposite situation, in the coming year.

In his work report, Li said that as part of sweeping tax cuts this year, manufacturing industry taxes would be reduced to 13% from 16%, while the transport, construction and other industries would see taxes fall to 9% from 10%. The burden of social security contributions falling on industry will also be significantly reduced, and the value-added tax system simplified.

CPPCC member and deputy director of the State Administration of Taxation Sun Ruibiao also told Caixin that many of the planned tax reductions were intended to help boost budgets for SOEs. SOE budgets are expected to be around 8.4 percentage points higher than they were in 2018.