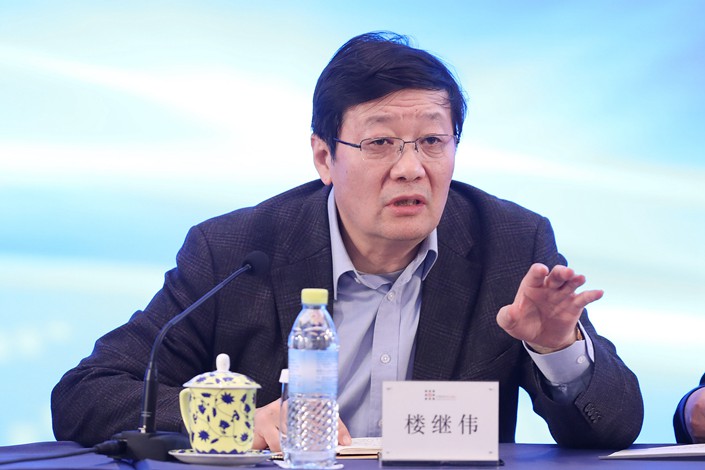 China is implementing a 2017 policy of transferring part of state firms’ equity to the national pension fund too slowly, a former finance minister told Caixin, as the country tries to lower the financial burden on companies amid slowing economic growth.

China started to transfer such assets in November 2017. The government said in a policy document at the time that about three to five state-owned enterprises (SOEs) and two state-run financial institutions would start transferring 10% of their equity to the national pension fund before the end of that year, and more SOEs would follow in 2018.

However, little progress has been made to date with only five SOEs completing the 10% asset transfer and more than 10 still filling in the paperwork, Lou Jiwei told Caixin in a Tuesday interview.

The government should pick up the pace, said Lou. “The current pace of asset transfers is too slow,” he said.

Dividends from state assets are supposed to be the main sources of funding to make up for the pension shortfall. The fund is allowed to make investments to generate income to achieve capital gains, the Ministry of Finance said in the 2017 document.

Lou said that such the asset-transfer policy is meant to ameliorate the widening gap between the pension fund’s revenue and expenditure — which is growing as the population ages and pension payouts improve.

The threat of a pension shortfall is looming. In 2017, China’s pension funds collected 3.3 trillion yuan ($492 billion) and handed out 2.9 trillion yuan in payments, official data showed. But the system only avoided going into deficit because of subsidies from the central government.

The country has pledged to reduce companies’ social security pension contribution ratio to alleviate pressure on firms amid the economic slowdown, according to the government work report delivered by Premier Li Keqiang on Tuesday. To do that, the government has to keep pushing ahead the policy of having SOEs transfer part of their equity to the pension fund, said the report.

Beijing has allowed local governments to reduce companies’ pension contribution ratio to as low as 16% from the current 20% (link in Chinese), according to the report. The contributions are based on the average wage in the provincial-level region in which the company is based.

China’s economy is projected to grow at a slower pace in 2019, and the government has pledged to cut taxes and fees by nearly 2 trillion yuan, following a slew of policies rolled out from last summer designed to encourage bank lending and government spending.