By Xiao Hui and Ren Qiuyu 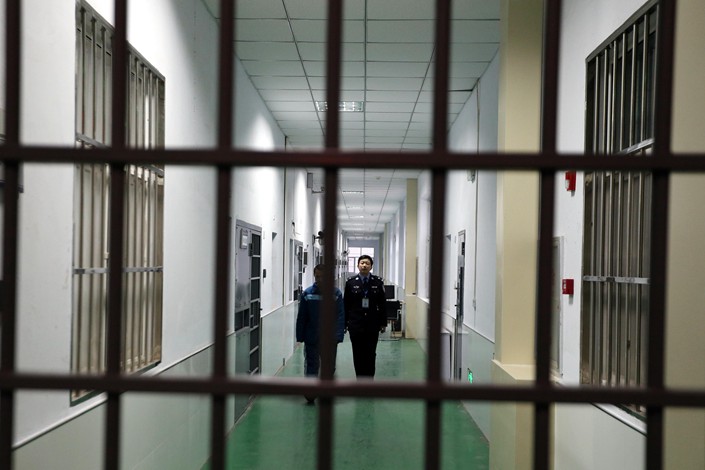 A Guangdong province deputy to the National People’s Congress has called for criminal detention centers to be managed by the Ministry of Justice rather than by the police in order to better protect the rights of those detained.

In China, suspects are held in detention centers throughout the pretrial and trial periods. The centers are currently managed by the Ministry of Public Security, which also oversees investigations. Many legal experts have pointed out that this system gives the police too much power over the investigation, as suspects often give false confessions to escape poor treatment or even torture. The Ministry of Justice and its local counterparts govern lawyers and prisons.

During the annual meeting, deputies to the National People’s Congress often voice suggestions for policy changes over the next year, such as proposals to abolish China's childbirth restrictions and proposals to improve legal aid. The proposals are then handed to the relevant ministry or department, which later responds with an update on how they are working to remedy the issue. It is unclear how far the proposal will progress.

A draft of a law on criminal detention centers released in 2017 called for giving detainees better access to bail and medical care, but those in the legal world said that it would do little to reduce police torture. However, no progress has been made in finalizing the draft for approval.

The purpose of the detention centers is to ensure a smooth litigation process, but legal experts argue that the centers do not adequately protect the rights of detainees. The NPC delegate who suggested the change, Xiao Shengfang, who is also the president of the Guangdong Lawyers Association, says that the basic functions of detention centers have been distorted under the current management system. Public security bureaus are overly reliant on confessions from detainees and use coercive measures to obtain information.

Last year, a Guangdong doctor was diagnosed with post-traumatic stress disorder after enduring a three-month stint at a detention center and undergoing tense interrogations. There have also been cases of unusual deaths, where detainees are said to have died in odd or mysterious ways.

Additionally, the high rate of pretrial detention gives the police easy access to detainees, which often means that they rely on confessions more than on formal investigations, Xiao said. However, many suspects who have been detained for extended periods make false confessions to get out of detention and start serving their sentences as soon as possible. Some detentions are unnecessary and become passive investigations, Xiao said at the legislature’s annual meeting in Beijing this week.

“In criminal investigations, the detention center is not neutral and is not detached, nor can it act as a protector of the detainee or suspects. However, various coercive methods are used to obtain confessions or information from the suspect in custody,” Xiao said.

China’s public security, procuratorial and judicial bodies are responsible for the investigation, prosecution and trial of a suspect, respectively. Transferring the management of detention centers to justice departments, which already manage prisons, would help the centers return to their original function and restrict the investigative power of the police, Xiao said. It would also guarantee detainees’ rights and improve China’s legal system.