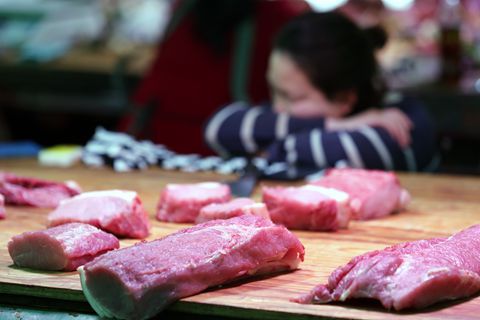 The consumer price index (CPI), which measures the prices of a basket of consumer goods and services, rose 1.5% last month from a year ago, down from an increase of 1.7% in January, according to data (link in Chinese) released by the National Bureau of Statistics (NBS). CPI has not been this low since January 2018.

The down-shift in consumer inflation was led by food prices, which decelerated sharply to 0.7% last month from 1.9% in January, as the price of pork, the most popular meat product for Chinese consumers, plunged during the month.

Pork prices fell 4.8% year on year in February, widening from January’s decline of 3.2%. Pork prices have been plummeting since late last year after farmers rushed to slaughter their pigs to avoid the risk they would become contaminated with African swine fever.

Vehicle fuel prices also put downward pressure on CPI growth, with the price of diesel dropping 3.1% from a year earlier and gasoline falling 3.1%, Dong Yaxiu, an NBS official, said in a statement.

Increases in non-food prices such as health care, education, entertainment and house rent contributed to 1.34 percentage points to the headline inflation rate, the NBS said.

The producer price index (PPI), which gauges changes in the prices of goods sold by manufacturers and mining companies at the factory gate, rose an anemic 0.1% in February from a year ago, the same rate as in January, NBS figures show. The index had slowed for seven straight months before February.

Weaker pricing power will put pressure on corporate earnings, hampering the ability of firms to hire and invest.

Prices in the motor vehicle manufacturing sector declined 0.7% from a year ago, accelerating from a 0.5% fall in January, NBS’s Dong said.