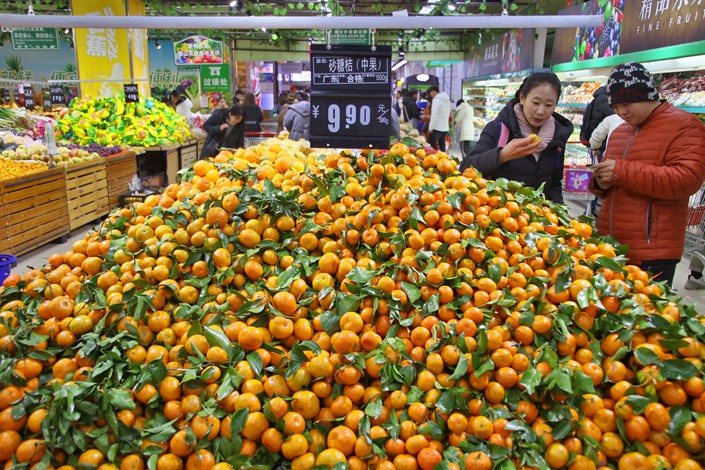 The producer price index, which tracks the prices of goods circulated among manufacturers and mining companies, inched up 0.1% year-on-year in January, down from a 0.9% increase in the previous month, according to data (link in Chinese) from the National Bureau of Statistics (NBS). The index, which has slowed for seven straight months, hasn’t been this low since September 2016.

The consumer price index, which measures the prices of a basket of consumer goods and services, rose 1.7% year-on-year in January, a 12-month low and down from a 1.9% pace in December, as gains in food prices moderated, the data (link in Chinese) show. Growth in the cost of food, which accounts for about a third of the CPI basket, slowed to 1.9% year-on-year in January from 2.5% in December, the weakest pace since August.

“Below-consensus inflation in January suggests that demand remained sluggish at the start of the year,” said Julian Evans-Pritchard, an economist with research firm Capital Economics. “Factory gate prices are now falling, which is likely to feed through to weaker profit growth among industrial firms and put pressure on policymakers to ease more aggressively,” he wrote in a note.

“With factory gate deflation likely to deepen in the coming months, we expect policymakers to roll out further measures to ease financial pressure on industrial firms, including cuts to benchmark lending rates, which would feed through to lower interest costs on the stock of outstanding loans.”

Economists at Nomura International also expect further easing measures. “The moderation in inflation leaves more room for policy easing, and we expect more aggressive easing measures to be launched in the second quarter when the growth slows significantly,” they wrote in a note after the data.

The timing of the Lunar New Year had a significant impact on the CPI readings, the Nomura economists said. This year’s holiday began on Feb. 4, 11 days earlier than last year, which should have skewed inflation more toward January, they said. Adjusting for the impact of the holiday, consumer price inflation could have dropped below 1.7% in January, they said.

The slowdown in the CPI growth rate in spite of the earlier Lunar New Year holiday suggests weakening domestic demand, according to analysts at China International Capital Corp., a Beijing-based investment bank. They estimate the pace could slide to as low as 1% in February.

The government has introduced a series of support measures over the past few months, including tax cuts and lower reserve requirement ratios for banks, to bolster the economy amid a slowdown that’s been exacerbated by trade tensions with the U.S.

The increase in gross domestic product, a measure of economic growth, slid to 6.4% in the fourth quarter of 2018 from a year earlier, the fourth straight quarterly slowdown, as the government’s campaign to lower debt among companies and local governments damped spending, infrastructure investment growth slumped and property curbs hurt the real-estate industry.