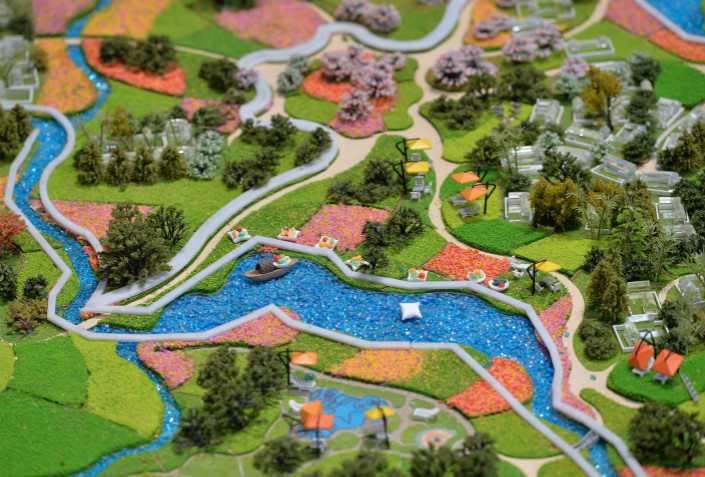 Model of a property development in the city of Chengdu, Sichuan province. Photo: VCG

Murmurs of a property tax in China have been bubbling for more than a decade. This time the wolf may finally be coming for the nation’s 15 trillion yuan ($2.2 trillion) real estate market.

A senior official said Friday at China’s annual session of National People’s Congress (NPC) that delegates will “focus energy” on drafting more than a dozen major pieces of legislation this year, including a property tax law.

Stock prices of major Chinese property developers slumped as much as 10% after Li Zhanshu, chairman of the NPC’s Standing Committee, made the pledge in a work report delivered to the session.

Although there have been some local property-tax pilot programs, China doesn’t have a national property tax, which could generate billions of yuan in revenue. Currently, China levies taxes during construction and transfer of properties.

Talk of instituting a property tax has been circulating since the start of the decade. But worries that such a tax would hurt the property market and disagreements on how a tax should be calculated and collected have left the issue contentious.

Li said the NPC will ensure that all the legislative plans are completed on schedule, without giving a detailed timetable.

Multiple experts told Caixin that property tax legislation would be complicated and time-consuming. They said they expected it wouldn’t be completed this year.

At present, a property tax proposal is only included in the NPC’s legislative agenda. Under the legislature’s process, relevant departments of the NPC will start drafting legislation. After repeated revisions, solicitation of comments and reviews involving multiple departments, a draft would be delivered to the NPC’s Standing Committee. Then it would need to go through three rounds of deliberation before a final vote.

The government has made some preparations for introducing a property tax. In February, the State Administration of Taxation issued a policy to improve the registration and sharing of information regarding property transactions, which was seen as a preparation for a new tax on property ownership.

China launched pilot property tax programs in Shanghai and Chongqing in 2011 by taxing only higher-priced homes and people with multiple homes. Since 2011, for owner-occupied properties in Shanghai, the real estate tax rate is from 0.4% to 0.6% of 70% of the original value of a property.

When Li delivered the report around 3 p.m. Friday local time, China’s A-share markets had closed for the day, but the Hong Kong market was still in last hour of trading.