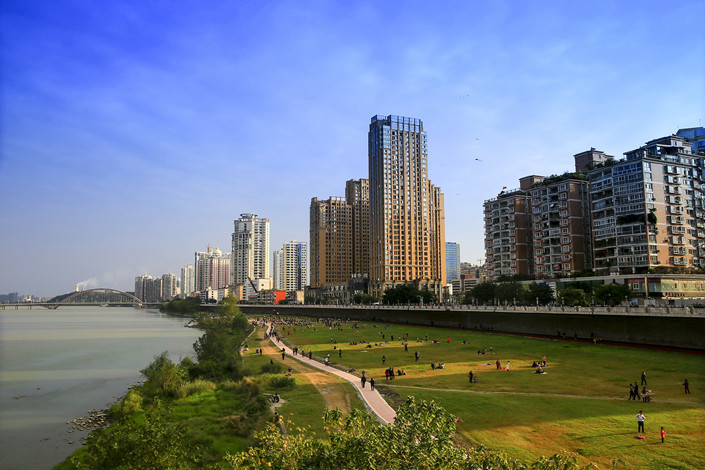 Real estate developers in China are unlikely to see the central government ease up nationally this year on its campaign to rein in an overheated property market, analysts said, despite the big fiscal pushes on the way to boost the cooling economy.

China’s government work report, which included a package of pro-growth policies like 2 trillion yuan ($298.2 billion) worth of tax and fee cuts, devoted fewer words than usual to the real estate market this year, despite its importance to the economy. “One key difference this time compared with previous easing cycles is that there has not been a broad relaxation of property controls,” said a research report by Capital Economics.

Once a lifeline of the economy, China’s 15 trillion yuan property market has become a hotbed of speculation and a target of a regulatory crackdown on financial risk following years of reckless investments that fueled a surge in government debt, home prices and excessive home inventories.

As the government has vowed to stabilize the property market this week, it still appears to be concerned about rising home prices, Julian Evans-Pritchard, senior China economist at Capital Economics, said in the report.

According to the report that Premier Li Keqiang delivered Tuesday at the opening of China’s annual legislative meeting, the government will continue efforts to maintain the “stable and healthy” development of the housing market,

Wording on the property policy in this year’s report involved subtle changes from last year’s such as the removal of the phrase of “city-specific policies,” suggesting that it is less likely the government will loosen nationwide restrictions on the market, investment bank Morgan Stanley said in a research note.

But the mention of real estate tax in this year’s report fueled expectations that the long-awaited tax is making progress, which is expected to play a crucial role in reining in real estate speculation.

The latest round of controls on the housing market started late 2016 with stricter home purchase restrictions and credit controls issued by most major cities. But as the economic slowdown deepens, some cities including Heze in the eastern province of Shandong, as well as Guangzhou and Zhuhai in Guangdong province in the south, have already started rolling back some restrictions on housing transactions since late last year.

Analysts, however, said they don’t expect broader loosening of property market controls anytime soon, even though some warned of a sharp drop in the market this year.

Compared with previous government work reports, the mention of the housing market was brief this year. China will “better address people’s housing needs, require local governments to shoulder primary responsibility, reform and improve housing market and support systems, and sustain the steady and healthy development of real estate markets,” the government report said, adding that it will continue the shantytown redevelopment project without setting a numeric target.

The lack of an explicit target for shantytown redevelopment, in contrast to the previous five years, reflects concerns that the program had contributed to rapid property price gains in lower-tier cities last year, according to a report by Societe Generale.

By mentioning the local governments' responsibility, the work report indicated that local authorities will be allowed to tweak policies based on their own circumstances, as housing market performance varies widely across China, analysts said.

This year’s report also pledged to “prudently advance legislation on real estate tax.” It was the third time that the long-awaited tax appeared in the government’s annual report since 2014.

Centaline’s Zhang said the wording indicated that work on the real estate tax is progressing. In February, the State Administration of Taxation issued a policy to improve the registration and sharing of information regarding property transactions, which was seen as a preparation for a new tax on property ownership.

China has yet to tax property ownership nationwide. Instead, taxes are mainly levied during the construction and transfer of properties.

Analysts expect that a new tax on property ownership will help curb speculation and arrest the growth of a real estate bubble. However, disagreements remain over how the tax should be calculated and collected.

Several experts said the legislation of real estate tax is unlikely to be completed anytime soon due to the complexity of the task. Last year, China’s lawmakers put the real estate tax on their legislative agenda for the 2018-2022 period.