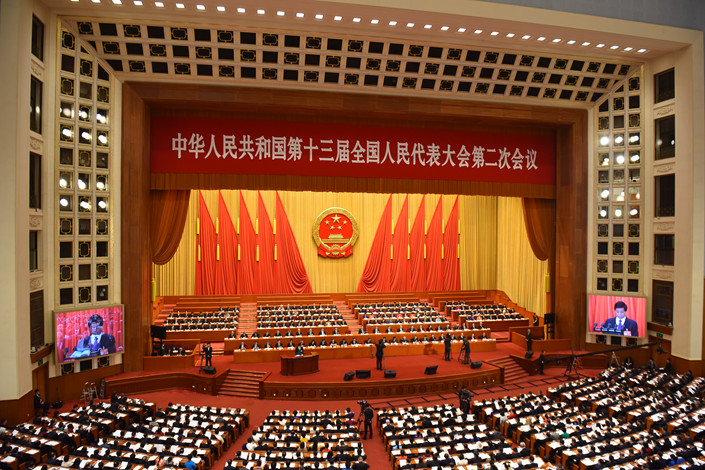 This year's annual meeting of the National People's Congress in Beijing. Photo: IC

China conducted a third and final reading Friday of a draft foreign investment law, including new language on complaint mechanisms, before a final March 15 vote on the landmark legislation.

Readings of first and second drafts took place in December and January for legislation that, if passed, would replace three current laws. The new law is intended to better protect foreign investor rights in China and ensure fair competition. It is also expected to ban local governments from forcing foreign companies to engage in technology transfers in return for domestic market access, which has long been a criticism by the administration of U.S. President Donald Trump.

Complaint mechanisms were a key item in the third draft, which is set for a vote at the annual meeting of China’s legislature, the National People’s Congress, now in session in Beijing. Extensive advance vetting of such legislation often ensures its passage on the final vote.

Drafts from the first two reviews established ground rules for complaint mechanisms but left some areas unclear. After the first draft’s release for public comment, many administrative law scholars and judges who handle administrative legal cases said they worried whether legal remedies would be allowed, including administrative reconsideration and administrative litigation.

An academic expert on administrative law told Caixin that China’s current laws protecting foreign investors are still somewhat lacking, and the new legislation would help to better protect them in the current environment. But the expert said the draft from the third reading is still somewhat vague on complaint mechanisms, and other documents or related laws may be needed to further clarify the process.

The new law comprises six sections: a summary of principles, investment promotion, investor protection, investment oversight, legal obligations and a supplement. It contains 41 provisions in total and is meant to create a better foundation for foreign investment in China, a key component of the nation’s economy.