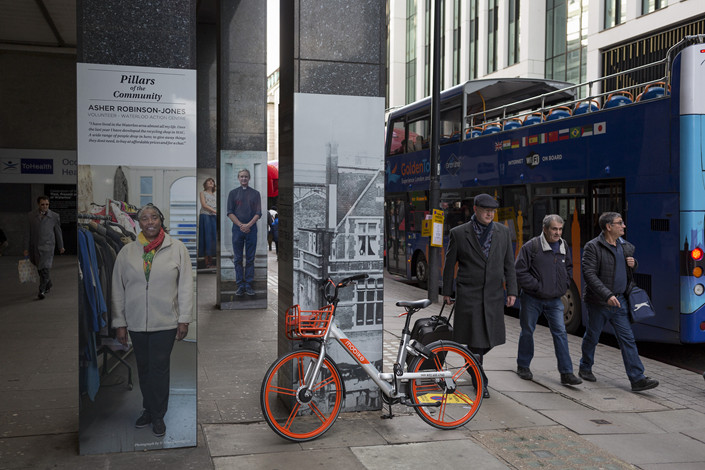 A Mobike sits abandoned in the street near Waterloo Station in London, on March 4, 2019. Photo: VCG

Meituan Dianping said it will take a “more disciplined approach” to entering new businesses, after its latest financial report said that its shared-bike unit lost billions of yuan last year.

Meituan, whose food delivery unit brought in nearly 60% of its revenue in 2018, said its newly acquired Mobike bike-sharing unit accounted for over half of losses last year.

The Chinese internet company, which offers online services including food delivery, reservation booking and business reviews, paid $2.7 billion last April for bike-sharing startup Mobike. The deal was seen at the time as Meituan deepening its involvement in the transportation sector, as it had already rolled out ride-hailing services in some Chinese cities.

But looking forward to 2019, Meituan “will take a more disciplined approach when allocating capital resources for our new initiatives and be more selective in scaling up new initiatives,” the company said in its first financial report since it floated in Hong Kong in September.

In order to put a brake on swelling costs, Meituan has decided to retreat from Mobike’s international expansion, announcing on Monday that operations in some Asian countries will be shut down. The statement also said the company would continue to evaluate bike-sharing markets in other regions. Mobike operates in a total of 200 cities in 19 countries, including Europe and the U.S., according to previous company data.

After a frenzy of development since 2015, bike-sharing in China has lost its luster as the sector has struggled to find a profitable business model. One-time sector leader Ofo is currently in serious financial trouble.

Meituan is working on a restructuring plan to better integrate its bike-sharing service and its other offerings. The company announced in January that the Mobike brand would soon be retired and its standalone app will be incorporated into Meituan’s own app.

Employees working in Mobike’s Beijing offices late last month moved to Meituan’s headquarters in the capital, a Mobike source who asked not to be named due to the sensitivity of the issue told Caixin.

Meituan has previously said it would stop expanding its ride-hailing business into new cities. Its service has been offered in Shanghai since early 2017 and Nanjing, Jiangsu province since early 2018.

Zhao Runhua contributed to the report