Bike-Sharing, Ride-Hailing Firms Team Up to Take on Didi 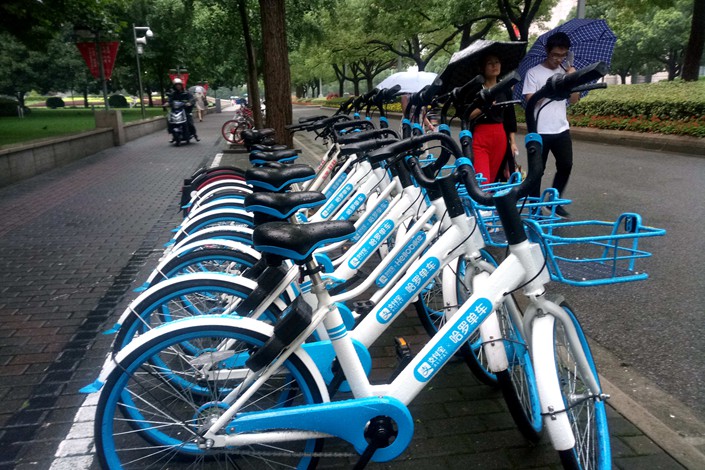 Bicycles of Chinese bike-sharing service Hellobike are seen on a Shanghai street on July 5. Photo： IC

Alibaba-backed bike-sharing startup HelloChuxing has formed an alliance with a minor ride-hailing company, ramping up its challenge to Didi Chuxing, which dominates the latter sector.

The shared-bike specialist, which launched its own cab-hailing service earlier this month, has partnered with Dida Chuxing in an arrangement to allow HelloChuxing users to hail Dida cabs on the HelloChuxing platform, the company announced on Friday. The service will be available in 81 Chinese cities, including Beijing and Guangzhou, on top of the three cities — Shanghai, Nanjing and Chengdu — where HelloChuxing’s own ride-hailing service is already available.

“By partnering with Dida, we hope to better serve our users and meet their transportation demands comprehensively,” CEO Yang Lei said in a statement.

Founded in September 2016, the Shanghai-based company has had its current moniker since last month, when it renamed itself HelloChuxing — Hello TransTech in English — as part of an expansion into other transportation services.

Early this year, the company netted a 1.9 billion yuan ($274 million) investment from e-commerce juggernaut Alibaba Group Holding Ltd., valuing it at around $1.47 billion.

HelloChuxing’s drive into the ride-hailing market comes as the sector faces increasing regulatory scrutiny in the wake of the deaths of two passengers killed by Didi drivers while using the service.

While the incidents have raised question about Didi’s ability to protect passengers’ safety, it is still the undisputed industry leader, with more than 90% of the Chinese ride-hailing market.

Last month, China’s largest online-services company, Meituan Dianping — which launched a high-profile subsidy program to challenge Didi — said it will scale back the expansion of its ride-hailing offerings to Chinese cities other than Shanghai and Nanjing, Jiangsu province.

Also, traditional automakers have jumped on the bandwagon recently, as they are worried that they could be left behind as consumers shift their transportation preference away from ownership.