Opinion: China Stocks Aren’t In a Bull Market Yet 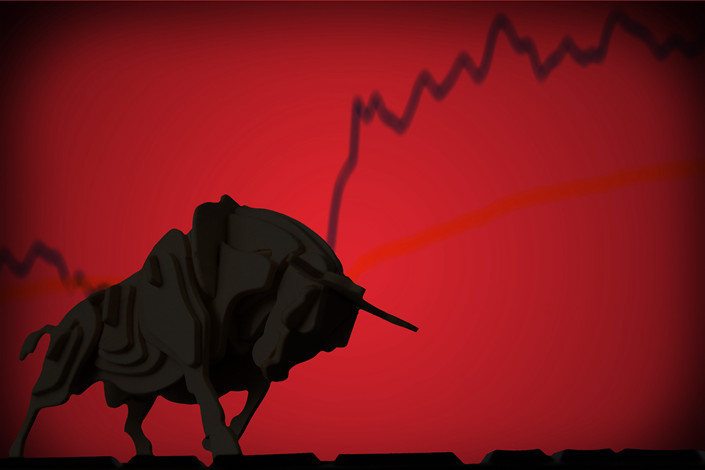 The A-share market has the potential to enter a bull market, but there aren’t many positive signs in the short term. Photo: VCG

Without a doubt, stocks were the best performing asset in China in February, but does that mean China’s A-shares have entered a bull market?

Historically speaking, in 2005, 2009 and 2012, on the eves of past stock bull markets, the growth of M2 — a broad measure of the money supply — overtook growth in nominal gross domestic product (GDP).

Higher M2 growth than nominal GDP rate indicates more money was created than demanded by the real economy, and therefore, in some ways, reflects the change of the amount of capital in stock markets.

In 2005, M2 growth outpaced GDP growth due to a spike in M2. In 2012, it happened because of a slowdown in GDP growth. In 2009, it was a combination of the two. If we generalize the causes of the M2 growth into increasing domestic loans and the central bank’s outstanding foreign-exchange purchases, M2 growth in 2005 was driven by rising exports and expanding foreign-exchange purchases, and in 2012 it was driven by the 4 trillion yuan stimulus package.

At present, credit and foreign-exchange purchases are very likely to increase, and nominal GDP growth is very likely to drop, but the changes are less powerful than they used to be. Therefore, to have a faster M2 growth than GDP growth, the three factors need to be happening at the same time, which is unlikely.

It will be very hard for industrial product prices repeat the bear market they suffered from 2012 to 2015, which means it is very unlikely that nominal GDP growth will drop significantly. China’s total social financing (TSF), a broad measure of credit and liquidity in the economy, increased by 10.4% year-over-year in February, up 0.6 percentage points from December, which was the first significant rebound since the second half of 2017, implying that the TSF growth will probably bottom out in the first quarter of 2019. From past experience, industrial product prices have never experienced a significant decline when the TSF growth is stabilizing or recovering.

Low stock of unsold property is another major difference between the current situation and the past, when high inventories discouraged property developers from investing or seeking financing. The current low inventory will therefore have less of a negative influence on the economy.

If nominal GDP growth doesn’t drop considerably, then M2 growth needs to be strong to outpace it. Among the factors that affect M2 growth, credit growth is predictable and will accelerate as favorable policies are implemented and the amount of total financing improves. However, given that the overall leverage ratio remains high and the government remains wary of financial risks, credit growth is unlikely to grow faster than expected.

The central bank’s outstanding foreign-exchange purchase position is the major mover of M2 growth. The funds started to increase at the beginning of January. Banks bought $12 billion more foreign exchange than they sold in January, the second highest monthly difference since August 2015. The change of expectations toward yuan rates resulted in banks’ buying more foreign currencies than they sold. However, there are two major differences between this year’s situation and the last year. First of all, U.S. interest rates were increasing last year while Chinese rates were declining, putting pressure on the yuan to depreciate. The Fed has taken a break from raising rates, lessening this pressure for the time being.

In addition, trade frictions between the U.S. and China exceeded market expectations, strengthening expectations that the yuan would depreciate. At the moment, China and the U.S. are close to concluding a trade deal, so the trade war won’t have a negative influence on the yuan, at least in the short term.

However, a key risk to the rebound in the central bank’s outstanding foreign-exchange purchase position is a potential decline in China’s current account surplus this year after many firms rushed to export their goods last year. However, improving conditions in emerging markets may cushion the impact of declining Sino-U.S. trade on overall exports. (Editor’s note: The current account measures a country’s total trade in goods and services plus earnings on cross-border investments.)

Looking ahead, the A-share market has the potential to enter a bull market, but there aren’t many positive signs in the short term. We need to closely follow changes in product prices, yuan rate and credit growth.