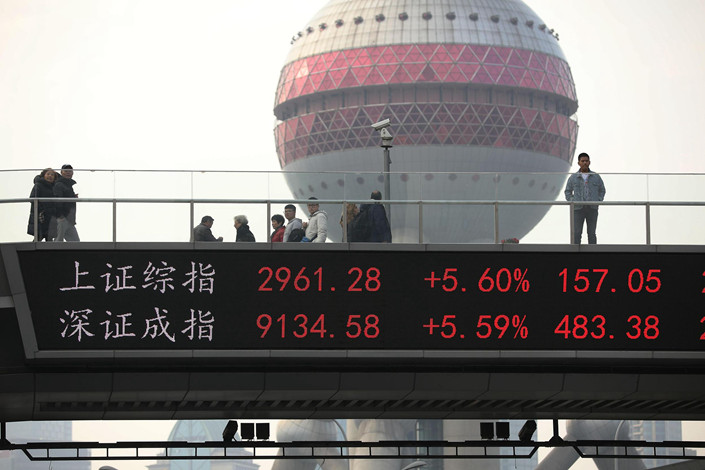 * Trading volume on the Shanghai and Shenzhen bourses topped 1 trillion yuan on Monday, the highest level since late 2015, and did so again on Tuesday

* This spike has likely been driven by retail investors, though observers say levels of margin lending are well below 2015 levels as it has become harder to access cheap credit since then

(Beijing) — Retail investors are again riding the tide of a rally in Chinese mainland shares.

In a reflection of investor enthusiasm, the combined trading volume on the Shanghai and Shenzhen stock exchanges exceeded 1 trillion yuan ($149.3 billion) on Monday, the highest since November 2015. On Tuesday, the volume again broke through the 1 trillion yuan mark, more than doubling the average daily turnover of 467.9 billion yuan on the two marketplaces this month.

So far this year, the benchmark Shanghai Composite Index has gradually rebounded from its four-year low, thanks to relaxed liquidity conditions and government moves to encourage investment in stocks. Yet concerns linger, particularly about the cooling economy and pending capital market reforms.

If you take a close look at the money entering the stock market, it looks unlikely that either brokerages or mutual funds were behind the increase because the size of their purchases hasn’t changed much, according to a fund company researcher. “The majority of the new capital is probably coming from the vast number of retail investors,” the researcher said.

Some retail investors have significantly added to their stock portfolios and have begun to borrow from brokers to buy more securities, an activity called margin lending. Outstanding margin loans grew to nearly 775.2 billion yuan on Monday, up from a recent low of 710.9 billion yuan on Feb. 11. Still, the numbers don’t come anywhere close to the trillion-level peak back in 2015.

Other investors, acting in a manner reminiscent of the last bull market in 2015, started tapping over-the-counter leveraged loans, according to an analyst at one brokerage firm. The informal form of lending once amplified the dramatic sell-off of mainland market in 2015, when the Shanghai index surged to an all-time high of 5,178.19 on June 12, before collapsing to 2,850.71 less than three months later.

However, such lending to stock investors this week doesn’t hold a candle to what was going on in 2015 because it’s so much harder for such lenders to get their hands on as much cheap funding, said one source in the lending business. In addition, new asset management rules have severely restricted leverage lending.

While domestic investors have been piling into mainland shares, foreign investors have been taking profits on some of the higher-flying stocks, such as Ping An Insurance Group, China’s largest insurer by market value, and Hikvision Digital Technology Co. Ltd., a supplier of video surveillance cameras. After 18 straight days of money pouring into the mainland through its stock links with Hong Kong, the trend reversed on Monday, when the mainland experienced a net outflow of 63.4 million yuan.

“Several blue-chip shares in the food and beverage industry have bounced back to fair valuations, so there’s little reason left for foreign investors to hold them,” said Luo Yongfeng, research analyst with China Securities Co. Ltd.

Facing soaring enthusiasm for mainland stocks, analysts and market observers have sounded the alarm about the dangers of a rally propelled by individual investors and big bets on bad stocks.

“The sentiment of A-share market has just picked up and has not reached the irrational rise in 2015,” said Shen Jianguang, chief economist of Mizuho Securities Asia Ltd. “However, we need to take a lesson from the 2015 market crash, in which the government’s cheerleading led investors to believe the stock market was going to go up forever.”

“We should remember that after the bubble burst, not only did investors take heavy losses, but the market itself also missed out on opportunities to develop and reform to become more competitive with other global markets,” Shen said in a Tuesday column.