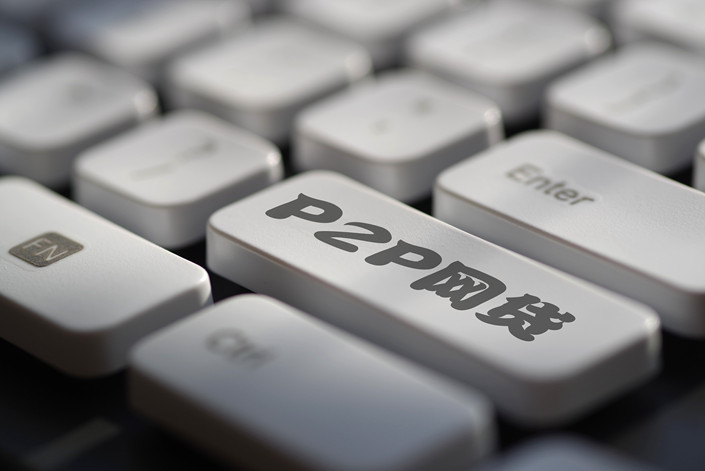 The number of P2P platforms in operation had fallen to 1,065 at the end of January, down from 2,282 a year earlier. Photo: VCG

* A senior Shanghai judicial official said that weakness in the regulatory system contributed to the chaos in the peer-to-peer lending sector, which has seen hundreds of platforms collapse since 2016

* “The central bank and the financial regulators focus on their area of responsibility, the police on theirs, and local financial inspectors on theirs. But in terms of the system itself, no one’s in charge,” Wang Guangxian said

(Beijing) — As China continues to clean up the imploding peer-to-peer (P2P) online lending sector, senior officials in the judiciary have called for a clearer regulatory structure and urged watchdogs — from central to local authorities — to work more closely together to weed out illicit platforms and help victims of fraud seek justice.

Wang Guangxian, deputy chief procurator of Shanghai People’s Procuratorate, which is responsible for the prosecution and investigation of alleged crimes in the municipality, warned that weaknesses in the regulatory system have contributed to the ongoing turmoil in the P2P industry.

“Since 2012, the central government has called for the country to guard against financial risks but across the country there are still many big financial cases,” Wang said during a discussion on the sidelines of the “Two Sessions” in Beijing on Monday. “We need to reflect on the system." Wang is a member of the Chinese People’s Political Consultative Conference (CPPCC), the top advisory body to the National People’s Congress.

He said different regulatory authorities are working in silos. “The central bank and the financial regulators focus on their area of responsibility, the police on theirs, and local financial inspectors on theirs. But in terms of the system itself, no one’s in charge,” Wang said.

“When some innovative platform emerges, everyone knows problems could emerge, but no one wants to take the first step to regulate. So when you look at the system it seems everyone is regulating, but in reality, no one is,” Wang said.

The Shanghai procuratorate has dealt with hundreds of cases of fund-raising fraud or illegal deposit-taking from the public which have been directly sent over from the police but which have not been subject to any kind of administrative penalty, Wang said.

P2P lending, which bypasses traditional lending by matching individual borrowers and lenders online, mushroomed in China starting in 2011 as the government encouraged the wider use of technology to expand financial services to small borrowers. The industry peaked in late 2015 with more than 3,300 platforms in operation, according to P2P research firm Wangdaizhijia.

But the industry became a focal point of a crackdown on internet financial risks that started in 2016 as lax supervision and fraud exposed a string of scandals and led to the collapse of hundreds of platforms. The shake-out is still going on — the number of platforms in operation had fallen to 1,065 at the end of January, down from 2,282 a year earlier — and no new platforms have opened in the last seven months, according to Wangdaizhijia data.

The fast-moving sector has left the authorities struggling to catch up. The regulatory framework is a patchwork of national and local rules with government agencies at various levels responsible for overseeing different aspects of the industry.

The campaign against online financial risks is spearheaded by the central bank, while the banking regulator issues rules covering the industry and local authorities are responsible for supervising P2P lenders registered in their administrative areas.

Local industry associations, self-regulatory industry bodies backed by local governments, are also involved in supervision and in clearing out illegal P2P platforms. The problem is that these organizations can only put pressure on firms that are members and they lack law-enforcement powers, Wangdaizhijia analysts wrote in a February report (link in Chinese).

“The industry urgently needs a unified nationwide regulatory guideline to set up an exit mechanism for unqualified P2P platforms,” the analysts said.

Li Shaoping, vice-president of the Supreme People’s Court and a member of the CPPCC who also spoke at Monday’s discussion, added his voice to calls for the authorities to make clear the lines of responsibility when drafting regulations and ensure that those in charge fulfill their legal responsibilities.

He also highlighted the unrealistic expectations of victims that the courts can get their money back for them.

Li referred to the case of Ezubao, once the country’s largest P2P platform, which collapsed in 2015 and was found to have bilked about 900,000 people out of more than 50 billion yuan ($7.3 billion) in less than two years. Li said that when the case finally went to court, the court was unable to recover their money.

Pei Changhong, another CPPCC member and a former head of the Institute of Economics at Chinese Academy of Social Sciences, called for regulators to be more careful when they award licenses to P2P lending platforms, and for the platforms themselves to take more responsibility for controlling risks.