By Wu Hongyuran and Ke Baili 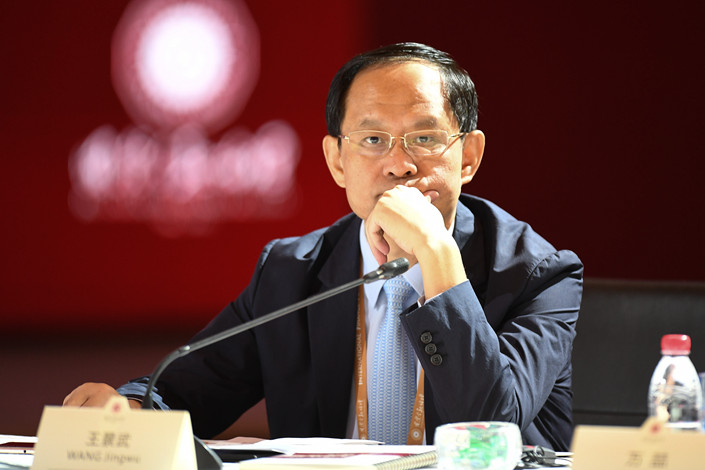 Regulators will not waver in pushing through asset management rules that have caused turmoil in the financial sector, said a senior central bank official, amid concerns slowing growth could weaken China’s campaign against financial risks.

Tough new rules to clean up the murky and risk-prone asset management industry were made more palatable for the industry last year, but financial institutions have continued to push for more flexibility. “All parties should not forget the original intent [of these rules] — to reduce and control financial risks,” Wang Jingwu, head of the People’s Bank of China’s (PBOC) Financial Stability Bureau, told Caixin on Monday. Regulators will remain “unwavering” in implementing the new rules, he added.

“If regulators yield to pressure from financial institutions, then the rules’ effectiveness will be obliterated,” said Wang, whose department is responsible for guarding against systemic risks in the financial system.

Chinese banks issued around 30 trillion yuan ($4.3 trillion) in asset management products over the past decade, with much of the money raised poured into the opaque shadow banking sector, circumventing regulatory oversight. Since early 2017, regulators have rolled out a series of measures to tackle the shady but profitable practices, as a part of a broader campaign to reduce financial risks and deleverage the economy.

The final version of new rules to tame banks’ asset management businesses was released in April 2018. After significant industry pushback, it extended the grace period for banks to comply with new requirements by 18 months, to the end of 2020, from the previous deadline of June 30, 2019.

Further concessions to financial institutions’ concerns came in July when regulators said banks could adapt to the new rules at a “measured pace,” widened the definition of products deemed compliant with the new rules, and allowed noncompliant products to be rolled over within the grace period. By November, sales of wealth management products were booming again.

As well as industry pressure, regulators must also deal with slowing economic growth and extra challenges brought about by the country’s trade war with the U.S. Small and private companies in particular have been hit hard by the crackdown on financial risks, which has reduced their access to credit. Over the past year, the PBOC has implemented a series of measures to improve market liquidity and encourage bank lending.

But Wang emphasized that the overall direction of the asset management rules is not going to change, and the market will experience some necessary “labor pains” during the process of reform.

“Financial institutions have previously made many nonstandard products, and blindly expanded,” he said, arguing that they should have to pay the price for making mistakes.