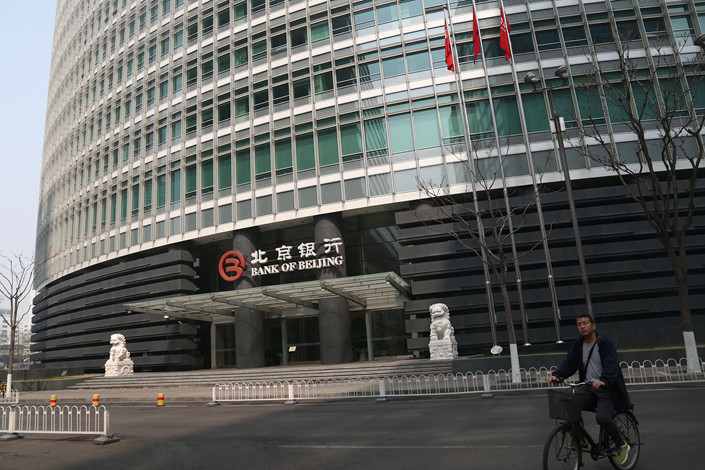 Bank of Beijing signed off as guarantor for the principal and interest in a 2.5 billion yuan debt investment plan to finance the renovations of some old buildings in the capital. Photo: VCG

Bank of Beijing has had to pay some 39 million yuan ($5.81 million) in interest on behalf of Citic Guoan Group Co. Ltd., as it serves as guarantor of 2.5 billion yuan of the company’s debts.

The lender said in a stock exchange filing that it signed off as guarantor for the principal and interest from Citic Guoan’s 2.5 billion yuan debt investment plan to finance the renovations of some old buildings in the capital. The debt investment plan will come due on July 31, 2021. However, because the company failed to make a quarterly interest payment in March, Bank of Beijing had to pay 39.45 million yuan in interest on its behalf on March 15.

Bank of Beijing is not the only bank to get entangled in Citic Guoan’s debt problems. The company has been in disputes with several other financial institutions over failures to repay loan contracts. The institutions include Beijing Zhongguancun Bank Co. Ltd., Huaxin Fortune International Trust Co. Ltd. and China Guangfa Bank Co. Ltd.

Relying on a borrowing binge over the past five years, Citic Guoan expanded its businesses from finance and consumer goods into education and health care. From the end of 2013 to the third quarter of 2018, the company’s total assets grew fourfold to 221.5 billion yuan, according to Lianhe Credit Rating. The expansion took place after state-backed Citic Group sold nearly 80% of its stake in Citic Guoan as part of its mixed-ownership reform.

Citic Guoan’s expansion didn’t boost its profitability. The company’s net profit in the third quarter of 2018 fell 89% from a year earlier to 56.04 million yuan. At the same time, its liability-to-asset ratio hit 85%, with the company holding total outstanding debt of 178.3 billion yuan, surpassing that of 2017.

Investors are thinking about dumping the company’s bonds. “We have always worried about the high debt ratio of Citic Guoan, but we hesitated (to sell its bonds) because they still have high ratings from the credit ratings agencies,” a bond investment manager told Caixin. “Still, we are considering selling off our entire position (in Citic Guoan bonds).”

Citic Guoan has 1 billion yuan in interest payments on various bonds and loans coming due in the next two months, a source who declined to be named told Caixin. It’s likely that the company won’t be able to make all of them, increasing the possibility of future defaults, the source said.

Amid rising concerns from the market and creditors, Citic Guoan has asked its former parent Citic Group for help, Caixin has learned. Citic Group reported Citic Guoan’s debt situation to the Ministry of Finance before the Lunar New Year holiday, and has created a team to help negotiate a restructuring plan. Details of the plan, however, have not been disclosed.

The story has been corrected to reflect the accurate asset size and net profit growth of the company.