By Liu Yukun and David Kirton 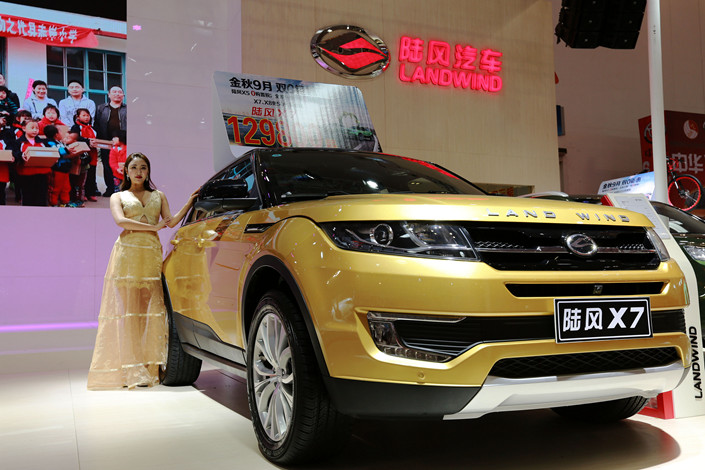 Automaker Jaguar Land Rover PLC (JLR) is celebrating its court victory over a Chinese rival in a copycat car case that the U.K. company is calling a “first” for international car manufacturers in China’s courts.

Jaguar Land Rover sued Jiangling Motors Corp. Ltd. in 2016, a couple of years after the Chinese automaker launched its Landwind X7, a sport utility vehicle that bore a striking resemblance to JLR’s Evoque, which hit the China market in 2011. The X7 retails for about one-third the Evoque, which currently sells for around 375,800 yuan ($55,800).

On Friday, a Beijing court ruled in favor of JLR’s claim that Jiangling violated its intellectual property rights on the design of five the Evoque’s major features, including its side-body design, window outlines, and the front and rear lights. It ordered Jiangling to cease the production, sale and marketing of the X7, although distributors told Caixin that as of Sunday they had yet to receive a suspension notice.

“This ruling is a clear sign of the law being implemented appropriately to protect consumers and uphold their rights so that they are not confused or misled, whilst protecting business investment in design and innovation,” Jaguar Land Rover said in a statement.

The ruling compounds Jiangling’s woes, with sales of the Landwind X7 falling 76% year-on-year last year to 5,611 vehicles. That marks a precipitous drop from the 10,000 X7s that the automaker claimed to have sold in the two weeks after the model’s launch. In contrast, JLR sold 10,000 Evoques in China last year. It follows the wider trend in China’s car market, where total auto sales fell for the first time in more than 20 years in 2018, despite rising sales of higher-end vehicles.