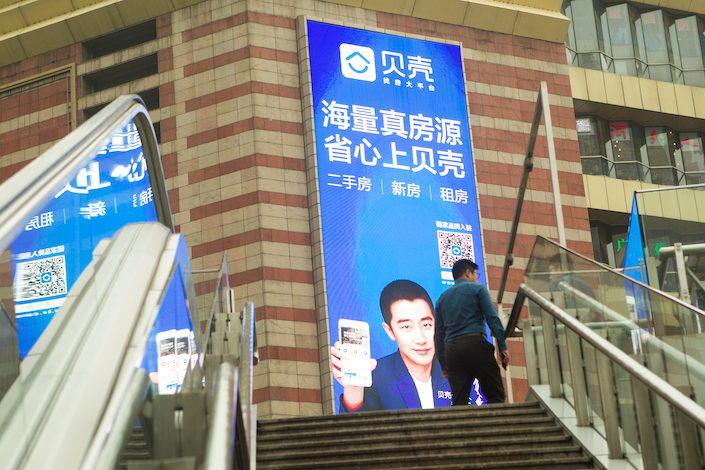 Beike, also known as ke.com, offers brokerage and financial services for Chinese renters and homebuyers. It is a subsidiary of one of China’s largest real estate agencies, Beijing Lianjia Real Estate Agency Co. Ltd., which is also backed by Tencent.

As Beike announced the funding plan, its parent Lianjia underwent a major shareholding reshuffle with the exit of 22 investors, reducing the company’s registered capital by 34%, business registration records showed. The move is most likely part of efforts to prepare for a public listing of Beike, analysts said.

Beike sources told Caixin that the former Lianjia investors’ stakes have been transferred to Beike.

No details were released on Beike’s latest funding round. But a Beike employee told Caixin that the company set a plan earlier this year to sell 10% of its equity for 12 billion yuan this year to support business expansion. That means one-year-old Beike would be valued at about 120 billion yuan and Tencent may hold as much as 4.47% of Beike after the latest investment, Caixin’s calculation showed. Tencent previously held 2.32% in Lianjia.

A real estate agency executive told Caixin that the latest moves in Lianjia and Beike indicate that the companies are preparing for a public listing of Beike.

In November, Beike’s South China region Chief Operating Officer Zhang Haiming said publicly that instead of seeking a listing itself, Lianjia would make Beike the main listing vehicle. Several Lianjia investors told Caixin earlier that Beike is likely to set up a variable-interest entity structure for an overseas listing.

Established in April 2018, Beike drew most of its senior management from Lianjia. In late March, Tencent allowed users of its popular messaging app WeChat to access Beike’s housing services through the app, fueling speculation that the tech giant was betting on Beike to expand its footprint in China’s white-hot real estate market.