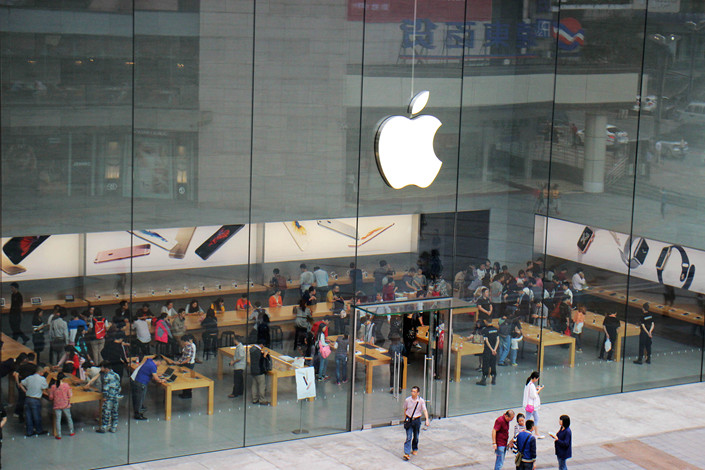 An Apple store in the western city of Chongqing on Sept. 29. Photo: VCG

Though Apple Inc. has slashed retail prices of its iPhones in China for a second time this year, continuing lukewarm sales could spell trouble for companies in its extensive Chinese supply chain.

Slumping sales first impacted manufacturers in November, when Apple told many of its suppliers that it was cutting its orders, Caixin has learned. Some companies said Apple’s orders were slashed by 30%.

“This means companies’ profitability is set to take a hit this year, as a sudden cut in orders will increase their leverage and inventory levels,” said an executive at a South China-based company. The executive couldn’t be named for this story as all Apple suppliers are bound by an agreement to keep their dealings with the company confidential.

China is a key country in Apple’s supply chain. The number of Chinese suppliers surpassed the number in the U.S. and Japan for the first time in 2018, with 41 out of Apple’s 198 major suppliers worldwide being Chinese, the most of any country, according to the Nikkei Asian Review.

While iPhone supply and assembly contracts are still attractive to Chinese firms, slowing sales are hurting revenue in the short term and forcing companies to diversify their sources of revenue.

The U.S. smartphone-maker in January lowered its revenue outlook for the December quarter —the first time it has done so since Tim Cook became CEO in 2011. The warning came as the Cupertino, California-based company struggled to sell its newest — and most expensive iPhones — released in September.

IPhone sales contribute around two-thirds of Apple’s revenue and provide further revenue streams in the form of related products and services like Apple Watches, AirPods, and Apple Music. Apple said revenue from iPhone sales in the December quarter declined 15% year-on-year.

In the face of this lukewarm reception, the company has rolled out rare price cuts in China — twice in just three months.

E-commerce sites Tmall and JD.com slashed the price tags for the iPhone XR, XS and XS Max by as much as 2,000 yuan ($298), Caixin reported in March.

The cuts were decided upon by Apple, not the retailers themselves, according to a Tmall source.

“We didn’t do too well in the fourth quarter last year,” Peng Mengwu, deputy general manager at Lens Technology Co. Ltd., told Caixin in an interview.

The company is a major cover-glass supplier to Apple and other phone brands such as LG Electronics. It has been working with Apple since the first generation of iPhones, and the U.S. giant contributed nearly 60% of its revenue in 2014.

The Hunan province-based company is not the only one in Apple’s supply chain taking a hit.

Biel Crystal Manufactory Ltd., the biggest producer of iPhones’ touch screens, reportedly laid off around 5,000 temporary workers from its factory in Huizhou, Guangdong province in November. Later that month the company decided to postpone its $1.5 billion plan to list in Hong Kong, citing unfavorable market conditions.

Acoustic-component maker AAC Technologies Holdings Inc. warned in February that net profit in the first quarter would drop by as much as 75% due to “reduced orders.” Rival GoerTek Inc. saw net profits slump over 57% year-on-year to 911 million yuan for the whole of last year.

Semiconductor packaging and test services firm, Jiangsu Changjiang Electronics Technology Co. Ltd., which clinched its first deal with Apple last year, also expects to sink into the red with a loss of 890 million yuan for 2018. It earned 343 million yuan in 2017.

According to Yan Zhanmeng, research director at Counterpoint Technology, a Hong Kong-based market research firm, Apple orders are much sought-after among contract manufacturers because they are generally large-scale and offer higher profit margins than those with other phone brands.

An industry analyst told Caixin that Apple demands suppliers prioritize its orders over those from other clients. This is a tough requirement, as contract manufacturers often produce components for several clients at once.

Apple suppliers are bound by rules set up the U.S. giant in terms of production requests, said another person familiar with the supply chain. “Whenever Apple expands its orders, the suppliers have to ramp up production and meet the requested deadlines,” the person said. “In the case of slower demand, Apple will just slash orders, prompting these suppliers to suspend production, reduce their workforce, and post weaker revenue.”

While Apple continues to be too valuable for Chinese suppliers to shun, these companies are finding ways to diversify their revenue sources.

Hon Hai, which trades as Foxconn, has in recent years invested in automation and is currently setting up a new iPhone assembly line in India to mitigate rising Chinese labor costs.

A number of Taiwan ODMs (original design manufacturers) have moved production out of the Chinese mainland, J.P. Morgan said in a report in January.

That includes Hon Hai’s smaller hometown rival, Pegatron Corp., which has chosen relatively cheaper Indonesia as its first destination, while Wistron Corp. is expanding its facilities at home in Taiwan.