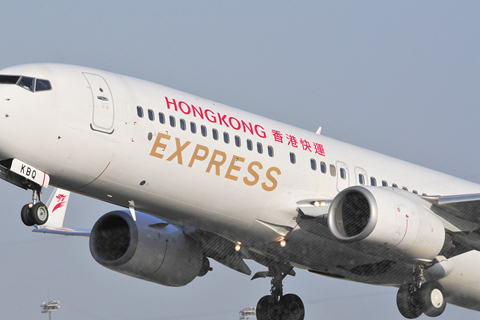 Hong Kong Express is the only low-cost airline based in Hong Kong. Photo: VCG

The deal is part of a plan for Cathay Pacific to acquire 100% of HK Express for HK$4.93 billion ($628 million) in cash and debt, Cathay Pacific said Tuesday. HNA reached the sale agreement with Cathay Pacific in its role as HK Express’s guarantor, Cathay said in a statement to the Hong Kong Stock Exchange.

However, a major shareholder of HK Express declared he will contest the agreement, which is intended to be completed by the end of 2019. The acquisition of Hong Kong’s only budget carrier by the city’s biggest airline is also subject to approval by the Hong Kong competition authority.

Analysts said the price Cathay Pacific agreed to pay is out of line, and investors responded negatively, pushing Cathay Pacific shares down 2.5% Wednesday.

The sale of HK Express would mark the latest in a long series of asset disposals for HNA. Over the years, the company expanded from an airline operator based on South China’s Hainan Island to a conglomerate with investments around the world in aviation, tourism, real estate and other sectors. But the company ran into trouble in 2017 when Beijing launched a major crackdown on HNA and other companies that had amassed billions of dollars in debt through years-long global buying sprees. Since then, HNA has been aggressively offloading assets to pay down debt.

The majority of HK Express flights are to Japan, South Korea and Southeast Asia. HK Express and Cathay Pacific together account for more than 60% of the city’s flights to Japan, according to Macquarie Securities Group.

Facing competitive pressures from regional rivals and declining earnings, Cathay Pacific was late jumping into the booming market for low-cost flights. The company said the acquisition represents an attractive and practical way to enhance its competitiveness.

But some analysts questioned the price Cathay is paying for the money-losing carrier. HK Express reported a net loss of HK$141 million in 2018 and a net asset value of HK$1.12 billion, according to Cathay Pacific.

The price tag amounts to about 4.5 times HK Express’s net asset value of HK$1.12 billion and is too high, analysts at Morgan Stanley said in a note to investors.

Cathay Pacific disclosed in its statement that it received a letter from lawyers representing a shareholder of an intermediate holding company of HK Express indicating an intention to contest the agreement. Cathay Pacific said it had the right to terminate the deal if any lawsuit occurs that would block the acquisition.

Cathay did not name the shareholder, but people close to the deal told Caixin that it is Zhong Guosong, executive chairman and the largest shareholder of HK Express. While Zhong couldn’t immediately be reached for comment, he was quoted in interviews with local newspapers as saying that he had no intention of selling his stake in HK Express, suggesting that HNA and Cathay Pacific bypassed HK Express’s other shareholders to sell the company. Zhong told the papers he was seeking legal advice.

Zhong indirectly holds 47.5% of HK Express, according to reports by local Hong Kong newspaper Ming Pao. Zhong is also an indirect shareholder of HNA and has recently been involved in a debt dispute with HNA. He played a key role in helping HNA to expand the Hong Kong flight market and has taken various executive positions or acted as a shareholder of several Hong Kong subsidiaries of HNA.