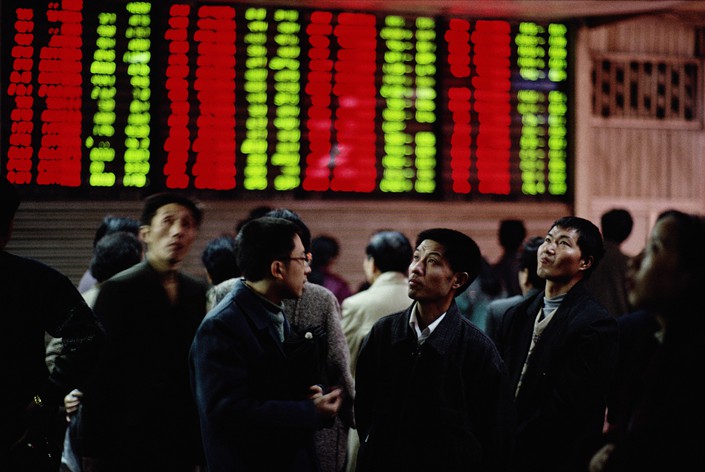 With the benchmark Shanghai Composite Index up more than 20% this year, demand for convertable bonds has taken off. Photo: VCG

The recent dominance of brokerages and fund houses over China’s red-hot market for newly issued convertible bonds could weaken after the country's regulators closed a loophole that had given them an advantage in bidding for the securities.

Convertible bonds, a type of security that the holder can convert into shares of the issuing company, have become a hot investment this year due in large part to the rally in Chinese mainland equities. As stocks have burst into bull market territory this year, the prices of several convertible bonds have surged by as much as 36%.

China’ securities regulator jumped on the issue earlier this week when it announced that most institutional investors will no longer be allowed to use multiple accounts to make offline bids for the bonds. “To treat investors fairly in the online and offline subscriptions of convertible bonds, the same investor in offline subscription should only bid using one securities account,” the China Securities Regulatory Commission (CSRC) said in a statement on Monday.

The success that brokerages and fund houses have had in bidding on these popular bonds has shed light on how a disparity in rules for securities accounts had left certain types of investors with a huge advantage over their competitors in one of the less tightly restricted corners of China’s securities market.

“Under the unfair rules for subscription accounts, hundreds of accounts owned by brokerage firms are taking the lion’s share of the meal, leaving us with little more than bones,” a source working for an insurer’s asset management department told Caixin before the rule change.

A bet on stocks

Demand for convertible bonds has been robust this year. The bonds are highly liquid, but because there isn’t a sufficient short-selling mechanism for bonds in China, their prices tend to rise in tandem with the share price of the company that issued them.

With the benchmark Shanghai Composite Index up more than 20% this year, demand for the bonds has taken off. In Bank of Jiangsu Co. Ltd.’s convertible bond offering on March 15, for example, orders outstripped the actual supply of bonds by more than 2,000 times. In China, issuers had raised 86.5 billion yuan ($12.9 billion) via 21 issuances of convertible bonds this year as of March 12, eclipsing last year’s total issuances of 79 billion yuan and approaching the record whole-year offering of 94.6 billion yuan in 2017.

Both individual and institutional investors have been using the bonds to make a bet on the rising stock market, said an investment director at a Beijing-based private fund manager.

Although many analysts have begun to warn that some convertible bonds are now overpriced, the rush to issue the securities has continued. On March 7, Zheshang Securities Co. Ltd. released a plan to issue convertible bonds just one day after it got regulatory approval to do so, highlighting the eagerness of issuers to ride the rally while it lasts, said Zuo Dayong, analyst at Industrial Securities Co. Ltd.

The idea here is that more accounts would give the brokerages more chances to win an order. However, the deluge of orders in effect muscled out other types of competing investors.

An asset manager at a brokerage in Shenzhen complained that this enormous overbidding was breaking the rules. Regardless of what type of securities account an investor holds, “bond orders should be based on the actual supply,” the asset manager told Caixin. “If the bond supply was only 200 million yuan, there’s no way for a single account to bid for 8 billion, unless they violated the rules and oversubscribed.”

The CSRC also addressed this issue in its statement on Monday, saying that investors in convertible bonds should not submit orders that exceed the total supply of the debt.

There is also evidence that some retail investors have been able to masquerade as institutional investors by setting up a hundreds of shell companies at a low cost. According to a final bidding list seen by Caixin for a convertible bond issued by Guizhou BC &TV Information Network Co. Ltd., 21 of the accounts that won bids were companies with Zhaoyuan Jinbai in their names. All were controlled by the same individual, Qin Cuiping.

The same group of accounts also appeared on the bidding list for Citic Securities’ convertible bond issuance. Each had put down an order for 8 billion yuan. For that part of the practice, regulators haven’t given out specific rules in the Monday statement. The CSRC did not specifically address this issue in Monday’s statement.