By Isabelle Li and Fang Zuwang 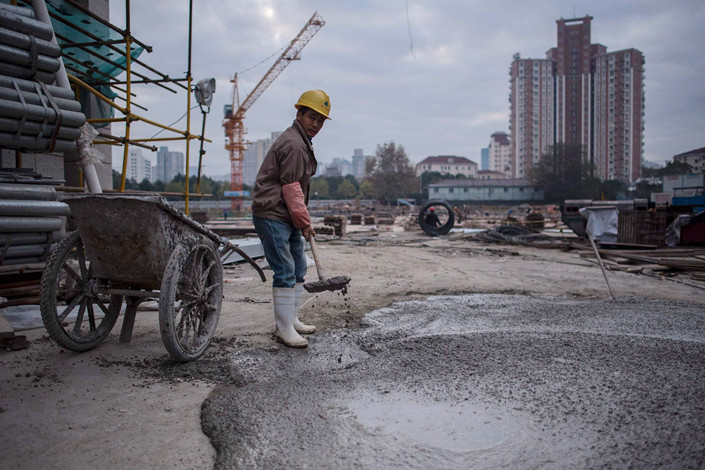 A worker fills a wheelbarrow with cement at a construction site in Shanghai in Nov. 29. Photo: VCG

A national crackdown on polluting industries has reduced supply in the cement industry, which has boosted both prices and the profits of major producers as the sector goes through a period of consolidation.

One beneficiary has been industry leader Anhui Conch Cement Co. Ltd., which reported an 88.05% jump in its net profit last year to 29.8 billion yuan ($4.43 billion). The Shanghai- and Hong Kong-listed enterprise reported total revenue of 128.4 billion yuan in 2018, an increase of 70.5%, according to its annual results released last week.

Anhui Conch, which is backed by the Anhui province government, attributed the increase in profit to high cement prices. Its profits equaled one-quarter of the total profits of the top 10 cement companies in China over the last two years, according to Caixin’s calculations.

China’s total cement production capacity dropped 5.3% from the year before to 2.2 billion tons in 2018, according to National Bureau of Statistics (NBS) data. The NBS said in a press conference last October that the national pollution crackdown had slowed activity in industries such as steel, coal and cement.

Demand for cement has not dropped, however, as investment in construction remained stable despite tightened controls over real estate development. NBS data shows that investment grew around 9.5% in 2018, totaling 12 trillion yuan nationwide.

This combination of curbed capacity and firm demand has boosted the price of the commodity. The price of one of the most commonly used kinds of cement jumped around 22% to an average of 427 yuan per ton in 2018, according to the Ministry of Industry and Information Technology. Ministry data also showed that total profits across the cement industry grew 114% last year, one of its best performances on record.

Liu Xu, a researcher at Shanghai’s Tongji University, told Caixin that cement prices will remain high for some time.

As consolidation in the sector continues, with large firms benefitting from higher prices and smaller firms being squeezed by the anti-pollution campaign, a pattern of mutual stakeholding may lead to reduced competition and less pressure on prices.