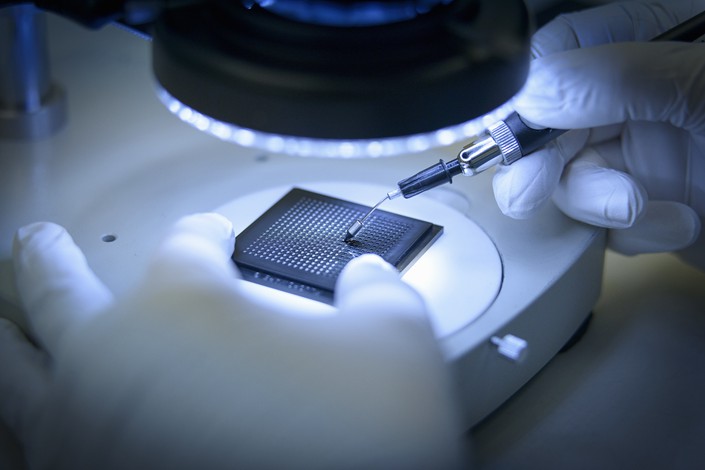 Three of the first nine firms that applied to list on Shanghai's new high-tech board are semiconductor companies. Photo: VCG

The Shanghai Stock Exchange announced earlier this month it had accepted applications to list on its hotly anticipated new high-tech board from nine companies.

Three of them are in the semiconductor sector, one of the 34 industries named early the month by regulators as favorites to list on the new board.

Beijing has poured huge resources into the sector to support domestic players and reduce its dependence on foreign-made technology, though the results of its efforts have been mixed.

The Nasdaq-style high-tech board was created partly aimed to lure technology firms to list in Shanghai rather than overseas. It offers a registration-based listing process which aims to have less regulatory red tape than other major mainland boards and will allow listings by money-losing companies.

The three semiconductor companies each cover one aspect of the industry — manufacturing, design and infrared imaging.

Based in East China’s Jiangsu province, HeJian was founded in 2001 and started production in 2003.

The chip manufacturer is a subsidiary of Taiwan semiconductor giant United Microelectronics Corp. (UMC), which currently holds a 98% stake in HeJian. UMC is the third-largest contract chipmaker in the world, after Taiwan’s TSMC and the U.S.’s Global Foundries.

HeJian specializes in 8-inch and 12-inch wafer fabrication. It currently has a monthly capacity of 60,000 wafers with over 2,000 employees, according to its website.

HeJian is the only one of the nine companies in the first batch of applicants that has yet to turn a profit. In 2018, the company reported an annual net loss of 2.6 billion yuan ($385 million), more than double its loss in the previous year. It aims to raise 2.5 billion yuan through its initial public offering (IPO) to expand its production capacity.

It is worth noting though that the government has been supporting HeJian and its two subsidiaries through generous grants as part of its policy to develop the integrated circuit industry. The manufacturer received government subsidies totaling 1.76 billion yuan in 2018 alone.

Founded in 1995, Amlogic, Inc. is a semiconductor company with operations in both the U.S. and China that specializes in the design and sales of chips.

The company began its journey by supplying chips for more traditional appliances such as DVD and MP3 players, before getting into more cutting-edge products like smart TVs, set top boxes and smart speakers in recent years.

In 2018, Amlogic recorded profit of 270 million yuan, up 68.8% year-on-year, on revenue of 2.37 billion yuan, according to its IPO paperwork (link in Chinese) filed to the Shanghai Stock Exchange.

The company sold a total of 80 million chips in 2018, 20 million of which were used in smart TVs. It made 55.6% of its revenue last year from chips for set top boxes, while chips sales for “artificial intelligence audio and video terminals,” a category that included smart speakers, contributed 11.2%.

Last year, its two biggest clients were Road-Well Hong Kong Electronics Co. Ltd. and WT Microelectronics Co. Ltd., which collectively contributed over 34% to its total revenue. The other two were Xiaomi Corp. and ZTE Corp.

Founded in 2009, Shandong province-based Raytron engages in the research and development of infrared imaging and micro-electromechanical sensor technology.

In 2018, Raytron reported profit of 130 million yuan on revenue of 380 million yuan, year-on-year rises of 94.5% and 146.7% respectively. Video surveillance company Hikvision Digital Technology Co. Ltd. has long been its biggest client, accounting for 22% of its total sales last year.

Raytron’s much larger rivals include listed Guide Infrared Co. Ltd. and Zhejiang Dali Technology Co. Ltd., both of which were founded in the 1990s.