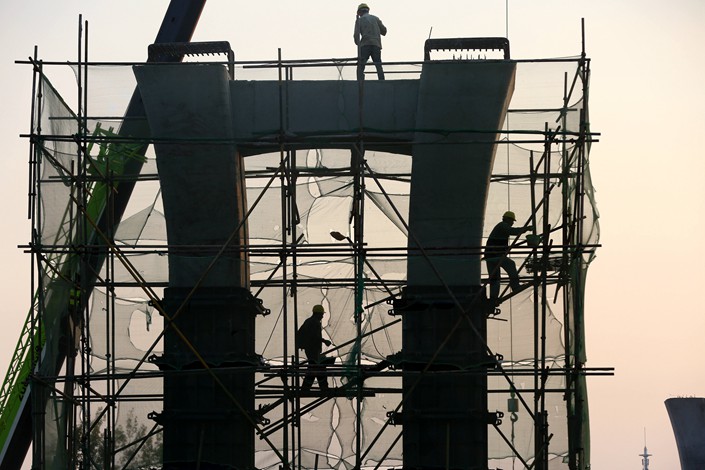 Two county-level governments in the heart of China’s lemon-growing country are leading a nascent wave of local governments turning to emergency measures to deal with buckets of souring debt.

Such local governments lack major tax revenues usually seen in the West, and instead rely heavily on land sales to fill their coffers. Yet a campaign to cool the nation’s overheated property markets has severely hurt demand for new homes, in turn reducing land sales. As that traditional revenue source dries up, many governments are finding themselves increasingly unable to service their debt.

Two such governments are Anyue county, known as the country’s “lemon capital,” and Yanjiang district. Both are in Ziyang, a small city in Southwest China’s Sichuan province.

“Fiscal restructuring is a normal market-clearing mechanism,” a person close to the Ministry of Finance told Caixin, adding that local governments shouldn’t view this as a negative step, but rather an opportunity to achieve fiscal sustainability.

Many believe that Anyue and Yanjiang are only the tip of the iceberg, and that China’s other small local governments may be sitting on a ticking time bomb of unsustainable debt. At the end of February, local government outstanding debt on the books had reached 19.1 trillion yuan ($2.8 trillion), equal to more than a fifth of China’s gross domestic product last year, data from the finance ministry showed. The number could be much higher when off-the-books debt is added.

Any city- or county-level government entering fiscal restructuring must use all means to reduce its debt load by increasing revenue, cutting spending or selling state-owned assets, according to China’s emergency instructions for resolving local debt risks given out by the central government (link in Chinese) in late 2016. Last year, Sichuan issued supporting regulations (link in Chinese) for the policy, becoming the first provincial government to do so.

Fiscal restructuring at the first signs of debt troubles can not only prevent further risk deterioration, but also help avoid broader systemic risks, the person close to the finance ministry said.

Anyue and Yanjiang made their moves in response to deteriorating debt situations. In 2017, both of their annual interest payments (link in Chinese) on special-purpose government bonds as a percentage of expenditures of their government-managed funds exceeded 10% (link in Chinese), a red line that triggers a fiscal restructuring under the 2016 policy.

Local governments’ special-purpose bonds, designated to fund public works projects including infrastructure, are generally repaid with returns from specific projects that receive the investment. Those projects are usually incorporated into local government-managed funds. The lion’s share of revenue for those local funds comes from land sales, with last year’s national average percentage at 91%, data from the finance ministry (link in Chinese) showed.

Anyue and Yanjiang may have crossed the 10% red line as spending by their government-managed funds dropped due to declining revenue, said Zheng Chunrong, a professor specializing in public finance at the Shanghai University of Finance and Economics.

Anyue stands out as an example. In 2017, its revenue from land sales plummeted 87% from the previous year, leading to a similar 85% decline in revenue for its government-managed funds, according to its financial report (link in Chinese). Accordingly, the funds’ spending slumped by two-thirds year-on-year to around 445 million yuan. Of that spending, 121 million yuan, or 27%, went to interest payments on special-purpose bonds, triggering the emergency alarm.

Shrinking coffers of recent years, coupled with increasing on-the-books debt, have become increasingly common among small cities and districts. Beijing has called on local governments to issue bonds rather than rely on other forms of fundraising. Partly as a result of following that call, Anyue’s interest payments on special government bonds surged more than nine-fold in 2017 from a year earlier (link in Chinese),

Lack of public information makes it unclear if other local governments have triggered the fiscal-restructuring alarm like Anyue and Yanjiang. Although the finance ministry has built an assessment and warning system targeting local debt, it’s not public, an official with the ministry told Caixin.

The fiscal restructuring mechanism only targets local governments’ debt on their books. Yet economists widely believe that the bigger challenge lies in hidden debt. Such debt refers to liabilities that local governments generally take through financing vehicles, public-private partnerships or procurement contracts.

Beijing’s stimulus policies after the 2008 global financial crisis touched off a local government borrowing binge, resulting in mountains of hidden debt that are now becoming a major burden as the world’s second-largest economy gradually loses steam.

“The value of the hidden debt of some local governments has exceeded the legal quota of their official debt,” Zhu Mingchun, a senior lawmaker, said earlier this month. “The risks of some regions are quite outstanding.”