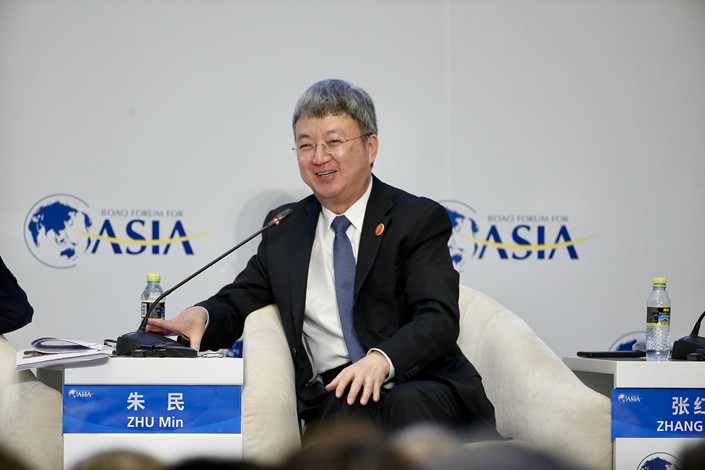 Turning on the credit tap is not the way to make it easier for smaller companies to get loans, a finance expert said at this week’s annual conference of the Boao Forum for Asia.

For the past decade or so, because of loose monetary policy, liquidity has flowed into financial markets, driving up stock and bond prices and creating easy profits for investors, said Zhu Min, head of Tsinghua University’s National Institute of Financial Research. “How can financial institutions lend money to small-to-micro companies if all of their money has been invested in the stock market?” he said.

The reason why financial institutions are reluctant to lend to small and micro enterprises has less to do with the monetary policy transmission mechanism than asymmetries in information, risk and costs, said Zhu, former deputy managing director of the International Monetary Fund and former vice governor of China’s central bank.

Information asymmetry refers to the fact that lenders don’t have enough information about these smaller companies to be able to effectively judge their creditworthiness, he explained. Risk asymmetry means banks will take higher losses than usual if the borrowing companies fail because they usually don’t have collateral. And cost asymmetry refers to the fact that the money banks stand to make off loans to these companies doesn’t quite justify the cost.

Citing Germany’s experience with the issue, Zhu suggested that large banks in China should provide liquidity to smaller community banks that are more familiar with the small companies in their areas. That would help allay the asymmetry issues by encouraging lending to smaller companies by the banks that know them best.

Compared with the Chinese mainland, Taiwan has taken a slightly different tack in helping small and midsize companies get financing. In 1974, it helped establish the Small and Medium Enterprises Credit Guarantee Fund. The fund primarily aims to provide credit guarantees to companies that are “promising but short of collateral necessary to obtain finance from contracted financial institutions,” according to its website.

As of the end of 2017, 26% of these companies were funded by financial institutions and 74% by the government, according to the fund’s annual report (link in Chinese).

For the past 45 years, the fund has guaranteed 400,000 small-to-midsize companies, of which 2,762 have become large companies, and 892 have gone public in Taiwan, Chen Jiaxian, president of Taiwan-based Bank SinoPac, said at the Boao Forum. Those public companies account for 46% of all of Taiwan’s listed firms.

Along the same vein, the central government last year set up the state-backed National Financing Guarantee Fund with 66.1 billion yuan in initial registered capital to help small firms get financing. The Ministry of Finance invested 30 billion yuan in the fund, making it the largest shareholder with a 45.39% stake.