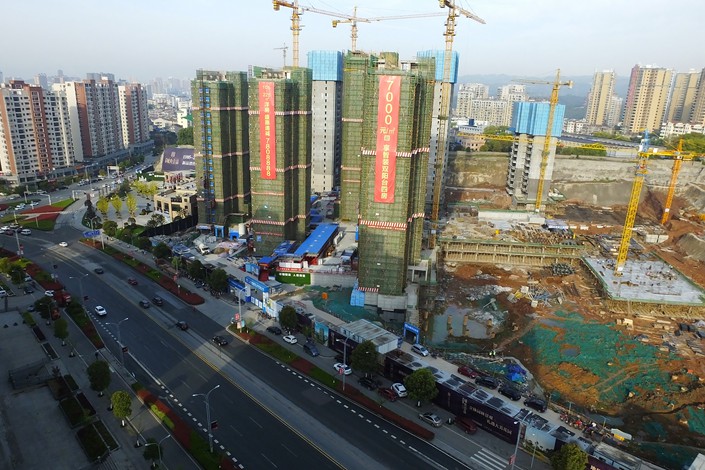 A Vanke building under construction in Yichang, Hubei province, on April 1. Photo: VCG

China’s largest real estate developer by sales spent around 29 billion yuan ($4.3 billion) less on buying land in the first quarter amid sluggish demand in the smaller cities on which it has long focused.

Country Garden Holdings Co. Ltd. spent 7.4 billion yuan acquiring new land in the first three months of 2019, compared to 36.5 billion yuan over the same period in 2018, according to a report Friday by the China Index Academy (CIA), a property market research organization.

The latest figures put Country Garden 24th in a list of the country’s developers ranked by the total value of their land purchases in the quarter.

Country Garden’s President Yang Guoqiang told a press conference last month that he is confident demand in smaller cities will pick up eventually. “Migrant workers will want to improve their living standards as their incomes keep growing, and they are most likely to buy houses in smaller cities, where prices are within their reach,” he said.

China Evergrande Group, the sector’s No. 3 player by sales, spent 14.2 billion yuan, roughly the same as the first quarter last year. In the initial three months of 2017, it spent 28.1 billion yuan.

China’s housing market has recently showed signs of slowing after years of breakneck growth. In 2018, major developers’ sales grew by 33%, down from 54% in 2017 amid tightened regulations and a cooling market, Hong Kong-based China Merchants Securities International Co. Ltd. said in January.

The market has slowed most in smaller Chinese cities, which have long been the target market of both Country Garden and China Evergrande.

“Home sales in most the third- and fourth- tiers cities aren’t likely to climb back any time soon,” the report predicted.

On the other hand, China Vanke Co. Ltd. and Sunac China Holdings Ltd. — respectively China’s second and fourth largest developers by sales — spent more on land in the first quarter.

In the most recent quarter, Vanke and Sunac’s spending was concentrated in the country’s larger cities.