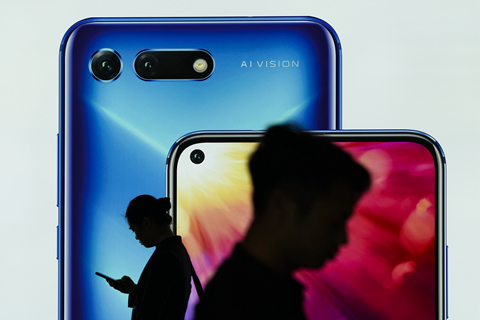 Huawei is shifting its strategic focus to consumer products this year amid stiffening headwinds in the carrier business market. Photo: VCG

At a recent company conference, Huawei founder Ren Zhengfei unveiled an internal restructuring to expand the consumer business, which includes smartphones, laptops, smart watches and other wearable and internet-powered devices.

Huawei is at a key point for strategic transformation, and this year’s shift in direction is designed to cope with attacks from the U.S. over alleged security concerns, Ren said. Next year, Huawei will focus on the development of its cloud business to compete on the global market, he said.

The Chinese telecom major and leader in developing the 5G next generation of mobile technology has come under attack led by Washington over its global expansion in the carrier networking business. Several Western countries including Australia and New Zealand have barred Huawei from taking part in local construction of 5G networks, citing security concerns.

In a speech published by the company, Ren said Huawei will restructure its consumer business division and grant the unit greater independence on structural and personnel decision-making to spur growth.

Over the next five years, the consumer unit will be encouraged to make bold experiments in its organizational structure and salary system, Ren said.

Huawei executives said the company aims to triple revenue from consumer products to $150 billion by 2023 from last year’s $52 billion. The consumer division will account for over half of company’s sales target for that year.

With strong growth of the consumer business, Huawei will have more ammunition for its battles in the carrier business market, said Eric Xu, Huawei’s rotating chairman, at the same conference.

Huawei has embarked on a public relations and legal offensive over the past few months in response to criticism from the U.S. and its allies. In early March, Huawei sued the U.S. government over a section of law that restricted its business in the U. S. The lawsuit further intensified a legal war between Huawei and the U.S. government after the U.S. Justice Department in January unveiled two indictments against Huawei, including nearly two dozen allegations of bank and wire fraud, obstruction of justice and technology theft. Huawei denied the allegations.

In December, Huawei’s chief financial officer and Ren’s daughter, Meng Wanzhou, was arrested in Vancouver by Canadian authorities on the request of the U.S., which is seeking her extradition on fraud charges.

Despite the setbacks, Huawei’s sales revenue hit a record 721.2 billion yuan ($107.1 billion) in 2018, up 19.5% year-on-year, according to the company’s annual report released last week. Consumer business for the first time became Huawei’s biggest revenue source, replacing the carrier business, with revenue of 348.9 billion yuan, up 45.1% from 2017.

Huawei shipped 206 million smartphones last year, up 35% from the previous year. It was the world’s third-largest smartphone supplier after Samsung and Apple. Yu Chengdong, head of Huawei’s consumer division, said in November that he expected the company’s smartphone shipments to reach 250 million in 2019 and 300 million in 2020, replacing Samsung as the world’s largest supplier.

Meng Zhanyan, analyst at market research institute Counterpoint, predicted that Huawei will narrow its gap with Samsung this year with annual smartphone shipments of between 250 million and 290 million.

As part of the effort, Huawei plans to tap the fledgling smart-TV market this year with the release of an initial model in the second quarter, several sources told Caixin in January.