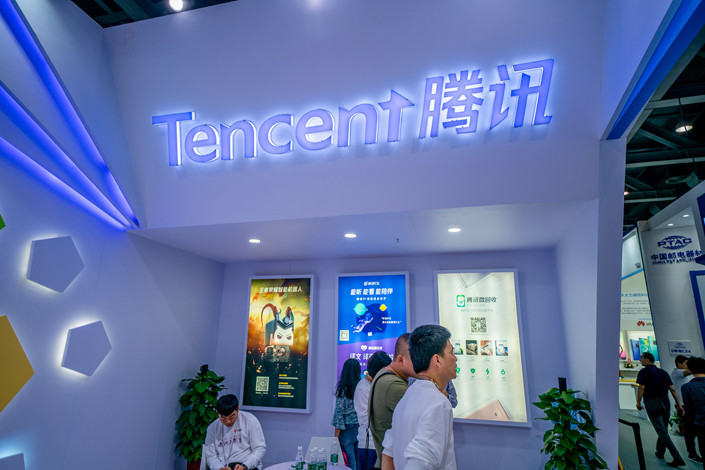 Tencent Holdings Ltd. has become the second-largest shareholder of two WeChat marketers as part of its ongoing effort to target more corporate customers.

Tencent agreed to buy 6.7% of Hangzhou-based China Youzan Ltd., the e-commerce service provider said Wednesday in a statement. An investment firm owned by Tencent will pay around HK$549 million ($69.9 million) for the stake, or an average of HK$0.53 per share.

Another subsidiary of Tencent will buy 97 million shares of Shanghai-based marketing-solutions provider Weimob Inc., according to a statement released by Weimob on Tuesday. Together with the 2.92% that it already owns, Tencent will end up holding a 7.73% stake in Weimob after the deal.

The purchases will make Tencent the second-largest shareholder of the two internet service companies.

The deals come after the tech giant unveiled a plan in September to revamp its corporate structure, including consolidating several content-focused business groups and creating a new division devoted to cloud computing and data services aimed at corporate customers.

The rise comes as social media has become a major venue that businesses use to reach out to consumers to sell their products and promote their brands.

In late 2016, WeChat unveiled its “mini-programs,” which operate like apps on Apple’s iOS and Google’s Android operating systems, but don’t require downloading.

E-commerce operators see huge potential in the nimble mini-apps as they offer an easy and immediate way for users to access services through WeChat. As of the end of 2018, Tencent said over 1 million mini apps had been made available on WeChat.

The investments mark the latest fundraising efforts by Youzan and Weimob to expand their fast-growing, but money-losing businesses in the cutthroat industry. Youzan reported a net loss of HK$839 million in 2018, widening from a HK$135 million loss the year before. The company completed a backdoor listing in Hong Kong in April 2018.

Weimob reported a loss of 1.09 billion yuan ($160 million) last year, compared with a profit of 2.6 million yuan in the previous year, according to its first annual report after going public in Hong Kong in August.