In Depth: Earthquakes Are the Latest Setback to China’s Fracking Ambitions 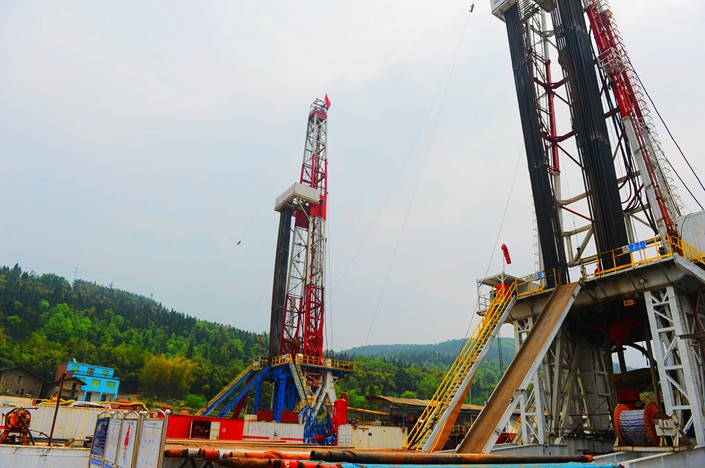 After a series of earthquakes shook Rong county in western China on Feb. 24 and Feb. 25, the Sichuan Earthquake Administration moved quickly to say there was no connection with fracking activity in the region.

Videos went viral on social media of protesters marching holding banners with such slogans as “Resist shale gas mining.” Facing a growing public outcry, the local government suspended fracking operations — the use of high-pressure liquid to blast through rock to extract oil or gas — for both companies. Various insiders at Sinopec and CNPC say they don’t know when operations will resume, if at all.

While fracking may not have been responsible for the earthquake, the suspension is another major setback for China’s fracking ambitions. The country sits atop an estimated 1.115 trillion cubic meters (39 trillion cubic feet) of shale gas, the largest reserves in the world. Many have long dreamed that the country might follow the U.S. and its shale gas transformation and harness its own reserves.

Such a shale boom would come at a crucial time. China became the world’s biggest natural-gas importing country last year, relying on imports for 45.3% of its total supply. And demand continues to balloon. Consumption reached 280.3 billion cubic meters in 2018, an 18.1% increase from 2017, following a 15.3% increase the year before. Yet unlike U.S. shale reserves, China’s tend to be located much deeper underground and in less accessible, mountainous regions. Finding the mechanisms to encourage the upfront investment needed to ensure its extraction has proved difficult.

As government departments began to mull the possibility of a shale-gas revolution in the late 2000s, it was seen as a potential way of breaking up the monopoly of state giants on exploration and extraction. The industry had a “honeymoon period” in 2009 when the government allowed foreign oil companies and foreign capital to enter joint exploration agreements with Chinese companies and to bid for deep oil and gas rights through auctions on designated blocks.

While this seemed promising in theory, once foreign companies began to explore in the blocks they had won, they often found extracting shale gas from their blocks would be far costlier than they realized. Interested rapidly waned, a planned second round of bidding in 2012 was postponed, and after that year no new foreign companies entered to explore China’s shale reserves.

The withdrawal of foreign companies placed the brunt of the burden on Sinopec and CNPC, particularly after China’s gas shortages in the winter of 2017, when large-scale gas outages occurred in the north of the country, exacerbated by the speed with which the government moved to increase its usage of gas for heating instead of heavily polluting coal power. Yet much of the blame was also given to the unreliability of the existing means for importing gas into the country.

In April the next year, state planner the National Development and Reform Commission issued a document calling for domestic gas production and storage to be ramped up. In July 2018, President Xi Jinping also said in a speech that “[gas] exploration and development must be enhanced to ensure energy security,” while in September, the State Council, China’s cabinet, issued documents calling for the “rapid increase of reserves and production.”

The latter order led to CNPC setting out plans for the vast and rapid development of shale gas extraction. In 2018, it opened over 300 new wells in the Sichuan Basin, an increase of 50% on its previous number. It aimed to open another 700 more by 2020.

Both companies took the lead in the government’s ambitions to produce 30 billion tons of shale gas by 2020. CNPC ramped up infrastructure investment and opened over 300 wells last year, with the goal of opening 800 by 2020. Sinopec also ramped up production.

Yet given the speed with which both companies were moving to develop their shale production to meet the 2020 target, the suspensions in the aftermath of the earthquake are major setback. So far there is no research proving a direct link between shale gas mining and earthquakes. From research in the U.S., there is some suggestion that shale mining could cause small earthquakes, but there’s no clear sign it could cause large earthquakes such as those seen in Rong county.