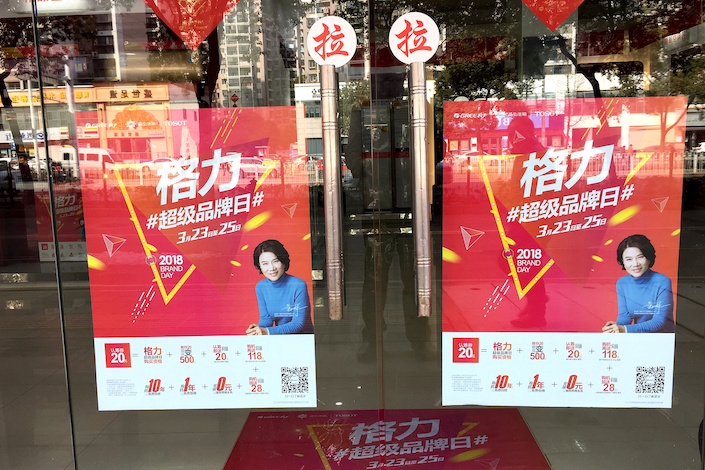 After news of the stake sale, shares of Shenzhen-listed Gree Electric surged Tuesday by the 10% daily limit. Photo: VCG

There may be competition for a 15% stake in state-backed Gree Electric Appliances as the Chinese private equity firm Hopu Investments is planning a purchase bid, sources familiar with the matter told Caixin.

After news of the stake sale, shares of Shenzhen-listed Gree Electric surged Tuesday by the 10% daily limit. The stock jumped an additional 9.99% Wednesday, pushing the potential value of the deal to $7.56 billion from $6.1 billion before the price run-up. Gree Electric is the world’s biggest maker of air conditioners.

Gree Electric’s management has a history of feuding with its state-backed parent. In 2012, the Zhuhai government parachuted Zhou Shaoqiang, a government official, into the company as Communist Party boss. Zhou was also nominated for a board seat, but his appointment was blocked by other shareholders including Hebei Jinghai.

People close to the company said the Zhuhai government and the parent company disapproved of Dong’s “aggressive” management style. Dong has also publicly expressed discontent with the government’s involvement in governance of state-backed enterprises.

The parent group has mulled selling its stake in Gree Electric since early 2018 and has reached out to Dong multiple times, a person close to Gree Electric’s senior management said.

People close the matter told Caixin that Hopu’s proposal could be attractive to the parent group. Hopu has invested in companies in integrated circuits, artificial intelligence, warehousing logistics and new energy. With a leading manufacturing platform like Gree Electric, Hopu could build an Internet of Things industry chain and help the company diversify its operations beyond the air conditioner business, those people said.

Gree’s main air conditioner business dominates the domestic market with a 35% market share, according to Euromonitor International. But that is down from about 40% in 2013 in the face of intensifying competition from rivals such as Haier Electronics Group and Medea Group.

Meanwhile, the company’s diversification efforts have faced headwinds. In recent years, it has tested the waters in fields including mobile phones, automobiles and chips, but none of it has shown signs of success.

Dong has set a sales target of 600 billion yuan by 2023, a 200% expansion from 2018 revenue. To achieve that goal, Gree Electric is in urgent need of finding a foothold for a second main business and speed up expansion in overseas markets, industry analysts said.