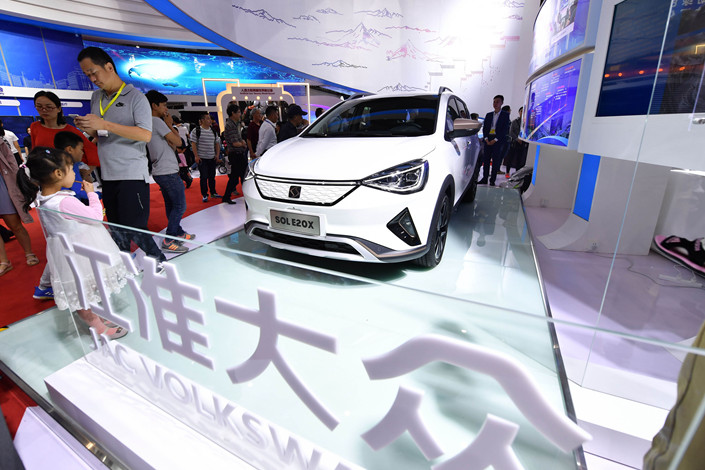 German automaker Volkswagen AG and its local joint-venture partner JAC Motors have declined to confirm a report that the former intends to purchase a “big stake” in the latter.

Reuters reported on Wednesday that Volkswagen has tapped investment bank Goldman Sachs as an adviser on a purchase plan, citing anonymous sources familiar with the matter.

But the companies were in lockstep when it came to their continued cooperation on Thursday. In a statement (link in Chinese), Shanghai-listed Anhui Jianghuai Automobile Group said the company is looking for deeper cooperation with Volkswagen after the pair set up an electric-vehicle joint venture in 2017. The statement said they had not finalized a plan.

Meanwhile a Volkswagen spokesperson told Caixin the firm would “explore all possible options together with all stakeholders to secure long-term success in China.”

The development comes as Beijing prepares to let foreign companies take a controlling stake in domestic and joint-venture automakers. Ownership controls were lifted late last year for firms that manufacture fully electric and plug-in hybrid vehicles, and controls on the wider car market will be abolished by 2022, according to the government’s timetable.

In October, Volkswagen’s rival BMW AG raised its stake in its Chinese joint venture to a controlling 75% from 50% for 3.6 billion euros ($4.05 billion), becoming the first to move after Beijing’s policy change.

In 2018, Volkswagen delivered a total of 4.21 million vehicles in the “Greater China” area, which includes the Chinese mainland and Hong Kong. JAC, which is China’s 11th largest local automaker by group sales, mainly manufactures commercial vehicles.

In December 2017, Volkswagen established a 50:50 joint venture with JAC to research and develop zero-emissions passenger cars, as the German automaker ramped up efforts to tap into the country’s booming electric vehicle market, currently the world’s largest. Volkswagen does not currently own shares in Shanghai-listed JAC.

Volkswagen is China’s largest foreign automaker by sales. It has two other joint ventures to manufacture traditional internal combustion cars — one with FAW Group Corp. and the other with SAIC Motor Corp. Ltd.

Volkswagen CEO Herbert Diess said last month in the company’s earnings call that the management board will look into plans to adjust its ownership in the firm’s assets in China and expected to announce the plans by early 2019.

Responding last month to rumors that its SAIC venture may be involved, the Shanghai-based Chinese auto group said Volkswagen had not formally discussed the matter with them.

The joint venture with FAW Group is also unlikely to be involved. In 2014, Volkswagen proposed raising its stake in the FAW venture by 9% to 49% in a deal some valued at 5 billion euros.

The plan was shelved after Volkswagen was mired in a high-profile emissions scandal which led to a former member of its management board being charged in the U.S. with fraud. It emerged the company had installed illegal software in millions of diesel cars in order to trick emissions tests.