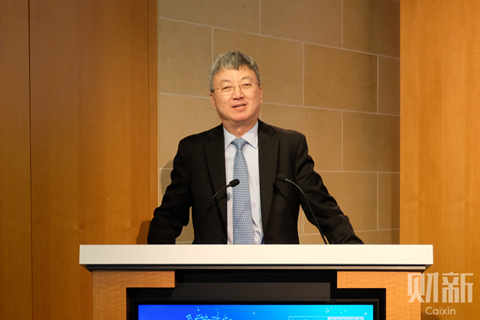 Further opening up the services sector and bringing in global competition is the only choice for China to improve productivity and support growth as the country continues its transition into a service economy, a financial expert said.

The “real challenge” facing China in its pursuit of sustainable growth is to increase productivity in the services sector, said Zhu Min, head of Tsinghua University’s National Institute of Financial Research.

China began its transition into a service economy in 2014 as the sector’s share of the economy exceeded 50%, but the country still faces the challenge of beefing up productivity of the sector, said Zhu, who is also a former deputy managing director of the International Monetary Fund and a former vice governor of China’s central bank.

“While China moves toward a service economy, the growth rate will slow down,” Zhu said.

It is a common challenge for global economies to maintain growth while they make the transition to a service economy because productivity of the sector is often significantly lower than that of the industrial sector. It is only when the services sector expands to 70%-75% of the economy that overall economic growth can be stabilized at about 2.5%, Zhu said.

During this process, bringing in international competition, particularly in the services sector, is the key to helping a country stabilize growth and avoid the so-call middle-income trap, he said.

He made the remarks at a roundtable jointly held by Caixin and the Peterson Institute for International Economics, a U.S. think tank, last week in Washington.

Zhu’s remarks echoed those of Chen Yulu, deputy governor of the People’s Bank of China, who said at the same Caixin roundtable that further financial sector opening-up is a path China must follow to deepen reform and integration into the global economy.

At the same event, Robert Zoellick, the American former head of the World Bank, also called on China to open up its services sector to increase domestic demand and bolster future growth. By allowing foreign companies greater access to its domestic market, China could create win-win outcomes in current and future trade negotiations, he said.

Since 2018, Chinese authorities have launched a series of measures to liberalize the economy to counter slowing growth, with an emphasis in the financial services sector. These measures have allowed UBS Group to become the first foreign institution to take control of a domestic brokerage, S&P Global Inc. to rate Chinese domestic bonds for the first time and international bankcard companies to set up ventures in the country.

The rising presence of foreign institutions in China will help improve the efficiency of China’s financial services sector, Zhu said.

But compared with the financial services sector, which is already one of the biggest in the world, other sectors such as health care and education are in greater need of opening up to improve productivity, Zhu said. China will face take a tough journey to adapt to the changes and deal with the challenges in the process of services sector opening-up, he said.

Earlier last week, the International Monetary Fund raised its 2019 China growth forecast to 6.3% from 6.2% while it projected a slower growth globally. The IMF cited improving economic indicators and brighter prospects for trade negotiations between China and the U.S. as factors for the forecast upgrade.

Zhu said that although the 0.1 percentage point revision is a small number, it is significant as an indicator that China’s economy has been stabilized after struggles and structural adjustments over the past few years.