In Depth: How a Bungled British Deal Left Everbright on the Hook for $522 Million 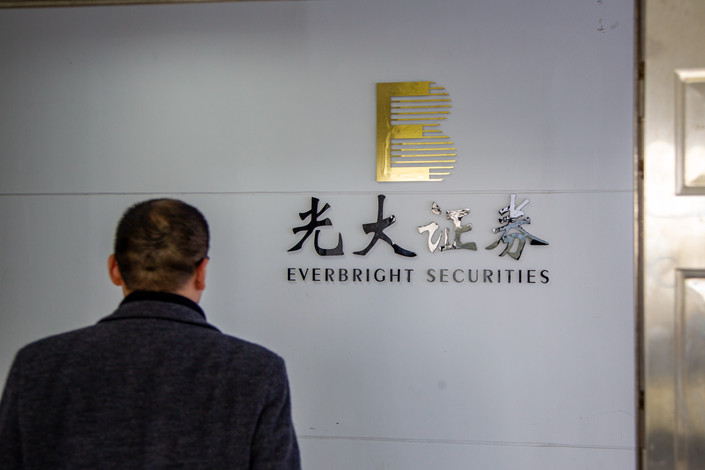 * While Everbright Securities entered the deal with only a minority investment of 60 million yuan, dodgy dealmaking led it to owe two senior-tranche partners 3.5 billion yuan

(Beijing) — When state-owned Everbright Securities Co. Ltd. formed a consortium of investors to purchase a 65% stake in a London-based sports media company for 5.2 billion yuan ($777.4 million) in May 2016, Chinese companies were already in the midst of an unprecedented buying binge that was making headlines for its audacity.

But as with many deals of that era, the consortium’s purchase of MP & Silva Holding SA (MPS) would become an albatross around its neck. MPS lost key contracts and its main dealmakers left for rival companies. In October 2018, MPS was declared bankrupt and liquidated, while Everbright has had to write off 1.52 billion yuan in impairment losses.

While the company only entered the deal with a minority investment of 60 million yuan, dodgy dealmaking led it to owe two senior-tranche partners 3.5 billion yuan, according to its 2018 financial statement. The company faces several legal battles as investing partners try to recoup their losses.

How did this subsidiary of China Everbright Group Ltd., a sprawling state-owned financial services company, enter such a quagmire of a deal and how did its risk management mechanisms perform so poorly? While one of the senior figures in the deal reportedly has been arrested, the stench of further corruption hangs over the purchase. As China’s mergers and acquisition (M&A) landscape becomes ever more complex, China’s regulators are hoping important lessons can be learned from the MPS debacle.

A big bet on sports

The consortium was one of several Chinese entities to try its luck abroad in 2016 against a backdrop of slowing domestic growth, sluggish domestic stock markets and the yuan’s continued depreciation. That year, outbound M&A rose 246% compared with a year earlier to $221 billion, according to PwC, with the likes of HNA Group throwing money into several overseas investments. Viewing rights for overseas sports were seen as particularly lucrative, with Dalian Wanda Group Co. Ltd. purchasing a 17% stake in Spanish soccer team Atlético Madrid (sold in February 2018) and a sports marketing firm, while several companies bought stakes in English Premier League clubs.

This made MPS an understandable target of Chinese interest. Founded in 2004 by well-connected Italian businessmen Riccardo Silva and Andrea Radrizzani, the company had secured highly sought-after television rights for top-flight English, Italian and German soccer, as well as Grand Slam tennis and motor racing. With revenues of around $600 million in 2015, it was a tempting prospect for internet entertainment company Beijing Baofeng Technology Co. Ltd., which had ambitions of competing with LeSports, a popular domestic sports media platform, in the Chinese market.

In May 2016, a unit of Everbright Securities and a Baofeng subsidiary established an investment vehicle called Shanghai JinXin Investment Consulting Partnership Enterprise. JinXin raised 5.2 billion yuan to buy a 65% stake in MPS. Baofeng promised to purchase the MPS stakes from its partner investors in the consortium within 18 months after the closure of the takeover deal. While apparently not made public at the time, senior deal partners included China Merchants Bank Co. Ltd. and Shanghai Huarui Bank Co. Ltd. would also receive compensation for supporting the deal.

Yet Baofeng would not make the purchase. MPS started to run into difficulties soon after the deal was done. According to insider sources cited by Bloomberg, the company failed to retain its most experienced dealmakers and lost its most important sports broadcasting contracts, while several contracts went unpaid. The company went through three CEOs after the takeover. In October 2018, the U.K.’s high court declared the company bankrupt, and ruled that its remaining assets would be liquidated and the proceeds handed to creditors.

JinXin also made major oversights in its purchase of the 65% stake, and did not have MPS’s cofounders sign noncompetition agreements. This meant that when Silva sold his stake in the company, he was free to go on to acquire another sports media company, SportsBusiness Group Ltd. While Radrizzani would remain as vice chairman of MPS, he founded another media company in 2015 called Eleven Sports Network Ltd., which would go on to secure a three-year deal to broadcast Spain’s top-flight soccer league in the U.K. and Ireland.

Both Silva and Radrizzani declined to comment for Caixin’s Chinese version of this article.

“Baofeng and its CEO had promised Everbright Capital and other priority investors it would honor the deal, but seeing MPS was in a bad situation, it decided not to do the buyback, and the mess fell to Everbright Capital,” an insider told Caixin. This caused Everbright major losses. As senior tranche partners, China Merchants Bank and Shanghai Huarui Bank had put around 3.2 billion yuan into the initial purchase. To support the deal, Everbright Capital, a wholly-owned subsidiary of Everbright Securities, had given them a ‘Letter of Makeup of Shortfall,’ which meant that when the partners failed to exit the investment as planned, Everbright was liable to pay the pair 3.5 billion yuan, covering the principal investment and accrued interest. This was a disproportionately costly liability given Everbright’s initial 60 million yuan minority investment.

The collapse of MPS and JinXin’s failure to extract itself from the deal has produced several legal entanglements as the participants look to recoup their losses. In October 2018 Shanghai Huarui began proceedings against an Everbright subsidiary for 452.37 million yuan in losses such as investment principal and returns, while in November, minor investor Shenzhen Hengxiang Equity Investment Fund LLP filed a case for 167.81 million yuan in losses.

This March, an Everbright unit said it is seeking 751 million yuan in compensation from Baofeng Group and its chairman Feng Xin, due to their failure to purchase JinXin’s stake. “Baofeng is liable for the failure to purchase MPS within 18 months,” the insider source said. Everbright Securities is also considering whether financial advisors on its overseas M&A are culpable. Meanwhile China Merchants Bank is also facing greater regulatory scrutiny for funding its investment in MPS through opaque wealth management products.

Everbright’s failure to secure noncompete agreements with MPS’s founders, and the substantial problems it created for itself with the Letter of Make Up of Shortfall, pose serious questions about how the company failed to anticipate and manage the major risks it was exposing itself to.

Answers to these questions are still not entirely clear. However, on March 18, the Shanghai securities regulator concluded an investigation of the incident by saying that Everbright’s “internal control mechanisms are flawed,” and its subsidiary is “poorly controlled.”

The regulator held Xue Feng, Everbright Securities’ president at the time, as responsible. Xue himself rose to the presidency in the wake of a “fat finger error” in late 2013 that led to 194 million yuan of losses for the company and to his predecessor falling out of favor. Since November 2016, he has also served as the company’s chairman and secretary of the party committee. But according to senior insiders, he has lost his voice in the company, and has only stayed on to manage the MPS mess.

Another potentially culpable senior manager is Dai Weiguo, the former president of Everbright Capital who was also an important facilitator of the MPS project. While he is thought to have been dismissed from most of his duties in the first half of 2018, he was kept on to deal with MPS. He was removed from the list of directors in August.

Yet so far much suspicion has fallen on Xiang Tong, who at the time served as director of Everbright Capital’s investment director and the manager of the takeover project. Several sources told Caixin that Xiang has been arrested under suspicion of accepting bribes.

Despite this, there is still no complete answer to the role each person played, and no clear answer to how risk management failed to spot the pitfalls in the deal. Industry insiders say that other securities companies have moved to strengthen risk management in the wake of the Everbright deal. More details are likely to come to light as the tangle of litigation over the MPS debacle unfolds.

“It was insane to leverage such a big deal with 60 million yuan, and with this so-called ‘Letter of Makeup of Shortfall,’ who knows the truth?” an industry veteran told Caixin. “Why are there loopholes in bidding agreements? Is it reasonable to vote? How did the risk controls fail? Is there corruption and collusion? These are the follow-up questions that need to be clarified.”

While reporters were hoping for some insight into the affair from China Everbright Group’s Chairman Li Xiaopeng at the Boao Forum last month, he simply said “the group will require all subsidiaries to strengthen risk management, not just Everbright Securities.”

This story has been updated to correct the names of the Shanghai securities regulator and Everbright Group’s chairman. He is Li Xiaopeng.