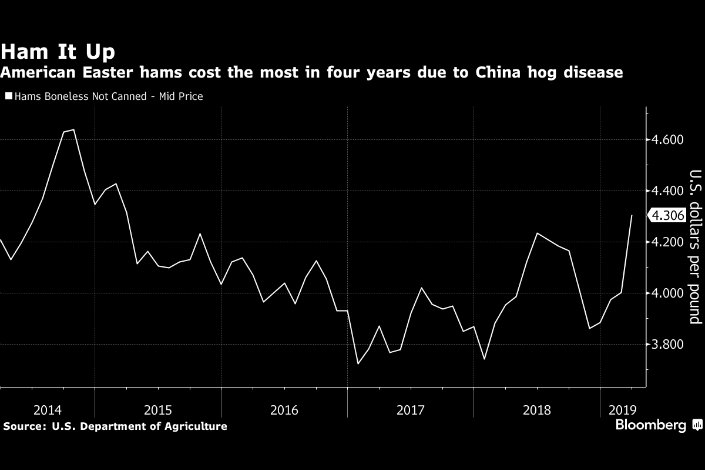 (Bloomberg) — Pork chops, chorizo and bratwurst could be more expensive in the coming months as pork prices soar as the result of a virus that’s decimating China’s hog industry.

Meat processors around the world are selling more pork to China to make up for shortages caused by an outbreak of African swine fever. The consequence is tighter supplies in the U.S. and Europe, which is pushing up prices. The trend is likely to continue as the disease quickly spreads throughout China, the world’s largest producer and consumer.

U.S. retail prices for boneless hams hit $4.31 per pound in March, the highest since 2015, according to Department of Agriculture data. In the European Union, wholesale pig prices have climbed 16% in two months.

In China, the effect is more severe. Pork prices in the country may surge more than 70% in the second half of this year, an agriculture ministry official said this week.

“Some meat that used to go to the U.S. is now going to China because it pays more,” Jens Munk Ebbesen, director of food safety and veterinary issues at the Danish Agriculture & Food Council, said by phone.

The disease, which is already upending China’s meat industry, will have far-reaching effects, from pushing up food prices to increasing demand for other meats, like chicken and beef. Pork output in the country may slump 30% this year, according to a report from Rabobank International.

China recently made its biggest-ever weekly purchase of U.S. pork and shares of JBS SA, the world’s largest meat producer by sales, rallied 8% this week.

“African swine fever has sparked a rally across global protein stocks, but it’s not too late to buy in,” Morgan Stanley analysts led by Rafael Shin said in a report to clients this week. “We think the rally has only begun and that the long-term impacts of ASF are still not understood.”

The extra demand will likely benefit farmers, who can sell their hogs for higher prices. Producers may start to breed more livestock, but the process takes time.

“It will be a good moment for producers,” Didier Delzescaux, the director of French pork council Inaporc, said by phone.

It’s not just China that’s grappling with the spread of disease. In Europe, there are fears that the virus, which was detected in wild boars in Belgium last year, could infect domestic hogs in major exporters, such as France and Germany. France is in the process of building a fence running dozens of kilometers near the border in an effort to contain the disease.